So will human-driven cars, as soon 2016, if WiTricity has its way 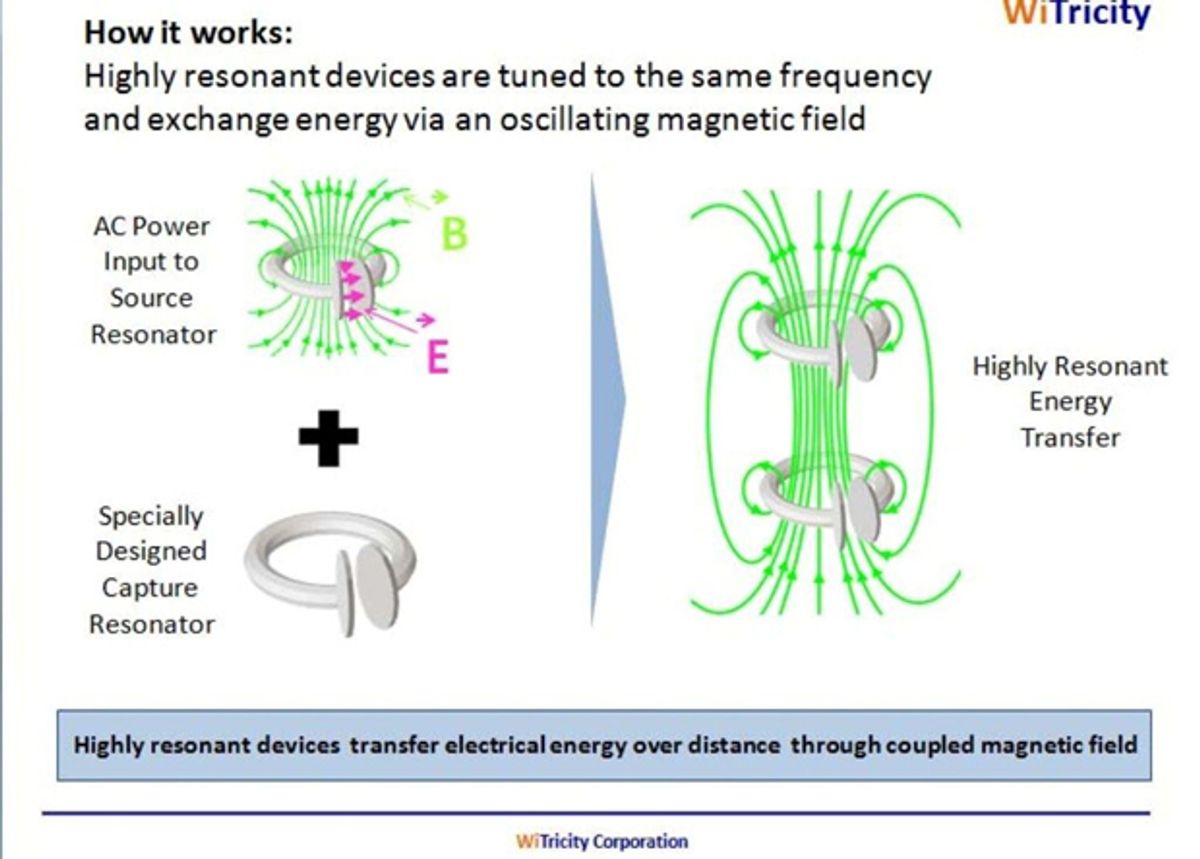 Cars will soon be charging themselves from a distance, and that’ll come in handy for those cars that don’t have a pair of hands with which to plug in a cable—the driverless ones.

"Getting it to dock in such a way that a connector can couple with another connector without breaking or wearing out is a really challenging problem," says David Schatz of WiTricity,  of Watertown, Mass. "If all you have to do is snuggle up to something, that's a wonderful solution."

WiTricity doesn't make car battery chargers itself; it licenses its wireless power technology to car companies and automotive suppliers, which develop it for the market. The technology uses specially tuned magnetic fields to transmit power to a circuit designed to resonate with them, a trick that Schatz says can funnel about 90 percent of the input energy into a car's battery. Even a direct cable connection gets only a few percentage points more, he adds.

The first wireless chargers will appear in 2016 model-year cars.

True, the power transfer spans just an arm's length rather than kilometers, as Nicola Tesla envisioned a century ago in his pioneering work. But that’s fine for a car, because an arm's length is long enough to reach a charger buried beneath the pavement. The charging system is the size of a notebook, Schatz says, and weighs about 3 kilograms.

Though the system may be perfect for robotic vehicles, it will be on the market much sooner than they are, says Schatz. The first will come in the 2016 model year.

Other companies are also working on wireless power transfer for cars, notably Qualcomm, whose rival inductive charging technology was featured in the debut of Formula E—a new racing circuit based purely on battery power. Schatz wouldn’t comment on that, saying only that WiTricity was the only company that had sealed deals with auto companies and suppliers.

Toyota has directly licensed the technology, and "several other [car companies] have announced the intention to introduce vehicles that use wireless charging—BMW, Daimler, Audi, Honda and Nissan." Those companies are working with the suppliers Delphi, TDK and IHI, which are themselves licensees.

Even gasoline-powered cars could use wireless chargers.

The technology is rolling out this fast because it can be of use to just about any electric car, not just the self-driving kind. People would rather not handle big, heavy, and very probably dirty cables, particularly if they’re standing in evening dress, in a parking lot, in the rain. Not only does Witricity's charging work in the rain, it can also work underwater.

And even gasoline-powered cars constitute a market. That’s because the latest ignition systems turn the engine off at red lights and on again on green to save fuel, and such “start-stop” systems may leave batteries in need of topping-off back in the garage. Nobody wants to have to struggle with cables there in the evening or to remember to unplug the next morning before driving away.