He just wanted to help some kids learn to code. Five million units later, his $35 computer has sparked a revolution 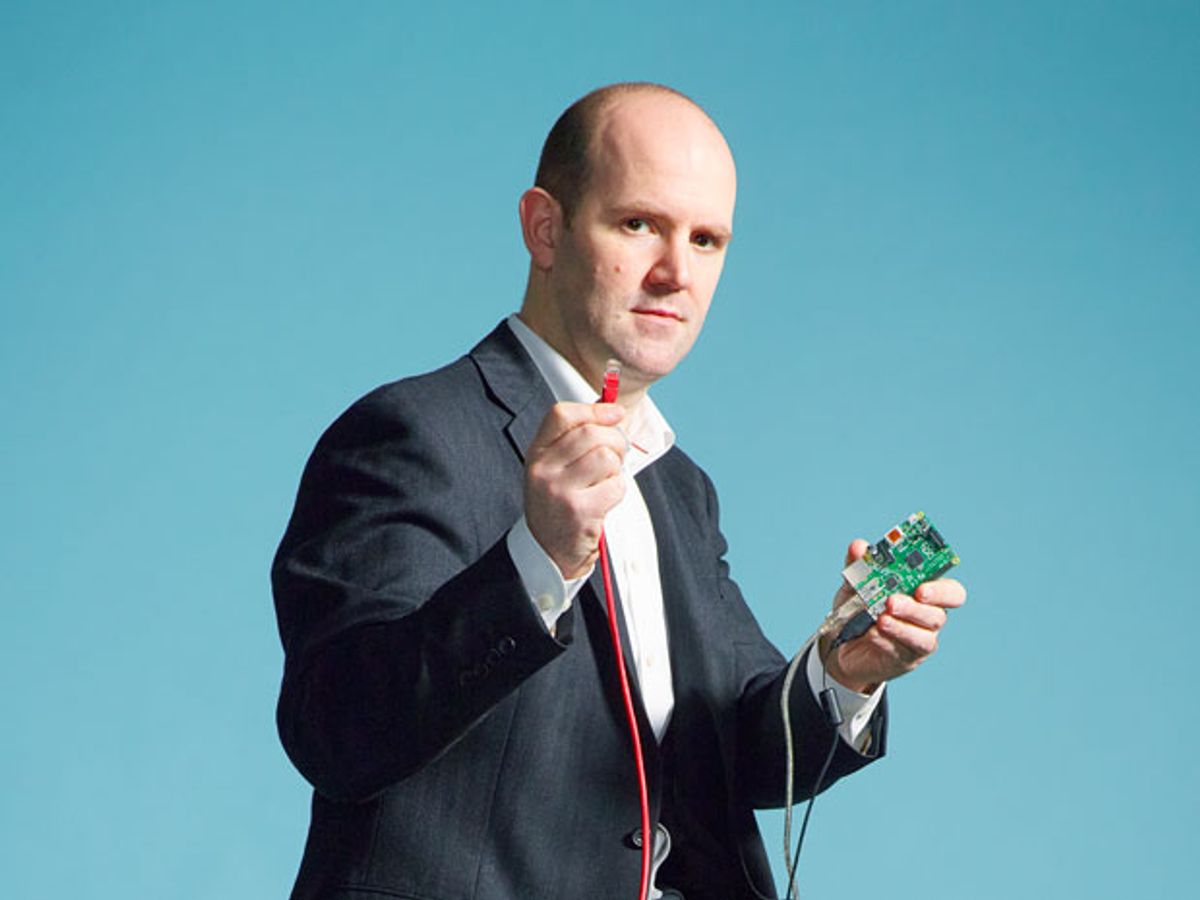 In 1988, 10-year-old Eben Upton bought his first computer: a beat-up, secondhand BBC Micro. This little machine was ubiquitous in British schools at the time, not least because it ran a simple programming language called BASIC, which Upton quickly mastered and used to create various games.

Like many of his contemporaries, Upton, who holds a Ph.D. in computer science from Cambridge and had already founded two software companies, owed his career to a childhood spent twiddling bits. “Kids today don't have that experience," he says. Instead of diving in deep with programmable computers like the BBC Micro, most of today's youth only scratch the surface of computing, despite all the hours they log with their phones, game consoles, and Web browsers.

Hero Moment: Dismayed at students' poor coding skills, he created a capable yet ultracheap computer to get them hooked on programming.

Upton's solution was to create a miniature computer, barely bigger than a credit card, which cost just US $35. It was essentially a circuit board fitted with a smartphone processor chip, 256 megabytes of RAM (since boosted to 1 gigabyte), and some attractive options for connectivity: USB ports, a slot for a memory card, general-purpose input-output pins to link it with other devices, an Ethernet port, and HDMI and analog ports to connect it to a television or computer monitor. “It's trying to be cheap, it's trying to be robust, and it's trying to be fun," says Upton.

When the Raspberry Pi launched on 29 February 2012, Upton figured that getting a thousand units into the hands of the right kids would help to end the drought of qualified candidates applying to study computer science at Cambridge. “Ten thousand would have been a great outcome for us," he recalls thinking. Instead, demand exploded: To date, more than 5 million units have sold, including the stripped-down Model A+, which boasts a $20 price tag, and the more powerful Pi2, which debuted last month. Pi's low cost means that pretty much everyone can own one.

“Overly sleek things can be bad for education," says Alan Mycroft, a professor of computing at the University of Cambridge's Computer Laboratory and a trustee of the Raspberry Pi Foundation. This charity, which Upton set up, takes the profit from Pi sales and plows it into education initiatives and other outreach activities.

Growing up in the small town of Ilkley in northern England, Upton didn't have a techy household—his father was a professor of English, his mother an English teacher. In part because of his own background, he's thrilled that the Raspberry Pi is providing those without IT-savvy parents an opportunity to learn about computing.

That egalitarian spirit pervades the Raspberry Pi headquarters as well. Right after Upton politely asked the office manager to make me a cup of tea, he bounded after her to apologize. “I'll do it," he said. “You've got better things to do, and I was being an ass."

Raspberry Pi's success can be tied to its vibrant user community. In June 2012, Pi enthusiast Ben Nuttall organized the first “Raspberry Jam"—part fan-club meet, part hackathon—and since then there have been hundreds more of these community-led events. “They're full of kids learning to solder," Upton says happily. He was so impressed that he hired Nuttall to work for the Raspberry Pi Foundation.

The foundation and the business now have a staff of about 20. Many of them came from the Cambridge offices of U.S. chipmaker Broadcom, where Upton began working in 2006 as a chip architect. Upton—who's now allowed to spend most of his time on Raspberry Pi—took on some of those who lost their jobs at Broadcom last year during a round of layoffs. That makes for a close-knit family atmosphere at the Pi offices, where Upton's wife, Liz, is head of communications. “It's not a nine-to-five job," notes Mycroft. “It's something that has consumed much of their lives for the last five or so years."

Although the Pi sells globally, penetration in the developing world remains patchy. The foundation has set up showcase projects that include using the computer as a local server for remote villages that lack high-bandwidth mobile or landline connectivity. The computers come loaded with useful information—Wikipedia entries, books, videos—and are then stationed in the middle of town so that villagers and schools can access the database wirelessly.

Back home, the Pi is also playing a growing role in schools. At St John's College School, just a 10-minute walk from Pi headquarters, a lunchtime programming club is buzzing with more than 25 pupils busily writing code and tinkering with the computers. “They learn by hacking and experimenting, which fixes it in their memories much better than if you give them a traditional course," says Graham Hastings, the school's head of information and communications technology.

Felix Baumgartner's record-breaking skydive in 2012 saw him fall to Earth from an altitude of nearly 39 kilometers. The following year, a toy bear called Babbage—the Raspberry Pi team's mascot—beat that jump by some 31 meters with the help of the miniature computer.

Dave Akerman, a high-altitude ballooning enthusiast, used a Pi as the onboard control center. It took pictures of the ascent by hydrogen balloon and used a GPS system to monitor altitude and trigger the bear's release, also capturing video of its leap from near space. A second Pi stuffed inside Babbage ran another camera and GPS system so that the intrepid bear could be recovered.

Akerman has used the Pi on more than 20 other flights. “It's the easiest and cheapest way of controlling a good-quality camera as well as sending down images and telemetry," he says.

“I love the high-altitude ballooning stuff," says Upton. “But this guy from Google [Alan Eustace, who skydived from more than 41 km in October 2014] has just beaten the record, so now we've got to go higher." Akerman is already planning the flight.

And in November 2015, the Raspberry Pi will make its first trip into space, when European Space Agency astronaut Tim Peake takes two of the computers up to the International Space Station. Kitted out with a suite of sensors, the diminutive computers will run code written by schoolchildren to perform experiments on board the craft.—M.P.

He also uses the Raspberry Pi in lessons for physical-computing applications—controlling model lighthouses or fairground rides, and as part of science experiments. “The great thing about the Raspberry Pi is that it's not about making money," says Hastings. The interface boxes and software required to connect conventional computers to devices are expensive and need frequent upgrades. But the cheap Pi, with its open-source software, has changed that: “I've been freed from the tyranny of the upgrade cycle," he says.

The Pi computers can run Scratch, free education software that portrays programming commands as jigsaw pieces, allowing children to quickly click them together into working programs. Then they typically graduate to Python, “one of the few languages that genuinely spans the range from trivial introductory level to professional software engineer," says Upton.

With millions of Pi computers now in circulation, Upton says the main barrier to getting more kids coding is a lack of skills among teachers. “A vastly greater investment in teacher training is required, and it's the government's job to do it—that's what governments are for. If we're serious about it, we've got to pony up the cash."

The Raspberry Pi Foundation aims to help with its Picademy, which since April 2014 has been offering free computer training for teachers. The foundation plans to roll out more education initiatives and is building corporate partnerships to bring the Raspberry Pi into more schools. Meanwhile, the U.K. government recently launched a revamped curriculum for students studying information and communication technology that places much greater emphasis on programming.

“The government has given us the curriculum of our dreams. So if we can't manage to get kids coding, then we should just give up and go home," says Upton. It's clear he has no intention of doing anything like that. “We've got to make it work."

Mark Peplow is a freelance science journalist based in Cambridge, England. Profiling Eben Upton reminded him that his own coding skills peaked around 1987, when he wrote a program for the BBC Micro that tested the user's knowledge of the world's capitals. “Yet despite my dismal record with computers," he says, “Upton's infectious enthusiasm inspired me to buy a Raspberry Pi." Peplow's daughter is now patiently teaching him how to use it.

An abridged version of this article appeared in print as “The Raspberry Pi-oneer."