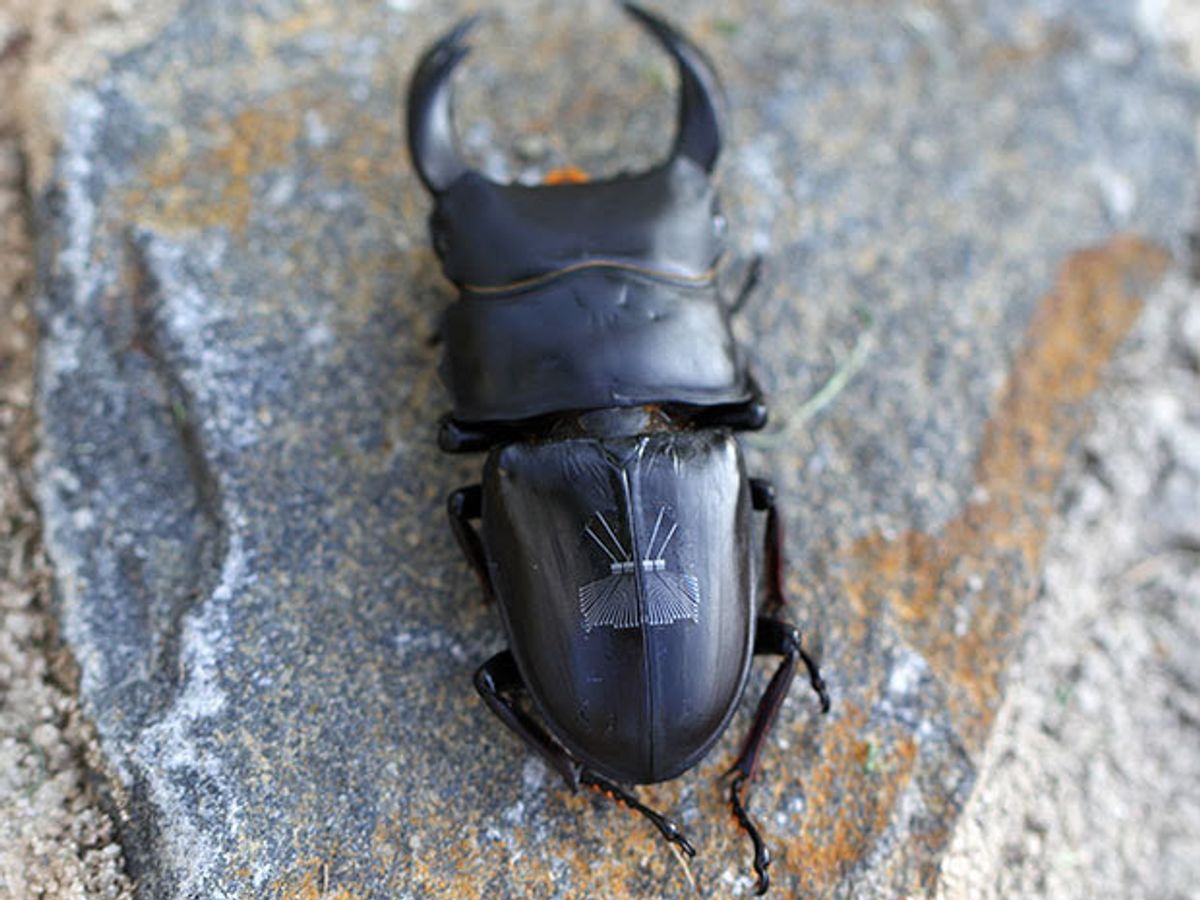 The rival rock stars of nanotech—carbon nanotubes and graphene—have joined forces to become a super group of late. They are now being combined to make supercapacitors or just to make the manufacturing process for one of them less arduous.

Now researchers in South Korea have joined them together to create one monolithically integrated flexible electronic device that can be synthesized in a single step and be attached to, among other things, live stag beetles that can be set loose to detect a range of environmental conditions or nerve gas agents.

In research, which was published in the journal Nano Letters (“In-situ Synthesis of Carbon Nanotube-Graphite Electronic Devices and Their Integrations onto Surfaces of Live Plants and Insects"), the Korean team developed a method using multiple catalysts to synthesize the all-carbon electronic devices so that they include transistors, electrodes, interconnects, and sensors all together that can fit onto a human fingernail or the back of a beetle.

The design of the device takes advantage of carbon nanotubes semiconducting properties so that they serve as the transistors or the sensors, while the pure conductor properties of graphene allows it to serve as the material for the interconnects.

"The channel part requires semiconducting materials whose resistance can be sensitively controlled by external bias,” explained Jang-Ung Park, Assistant Professor at Ulsan National Institute of Science and Technology (UNIST), in an interview for Phys.org. “The electrode part needs metallic materials whose resistance is very small with the negligible change by external bias."

The Korean researchers, representing both the UNIST and the Korea Electrotechnology Research Institute, have demonstrated that the fully integrated, all-carbon devices can be attached to a wide variety of surfaces including plants, insects, paper, clothes, and human skin. The flexible electronic sensors remain attached to the surfaces by exploiting van der Waal forces, which represent all the attractive or repulsive forces between molecules that are not covalent bonds.

The researchers took the unusual step of applying the flexible sensors to plants and insects to see if the devices could be used to detect very low levels of DMMP vapor (1 ppm), which is used for producing nerve agents such as soma and sarin. Park told Nanoclast that his team's devices performed comparably to current state-of-the-art sensors and showed that the sensors could be used to monitor a variety of environmental conditions, including temperature, humidity, pollution, and infections. The devices do not need a battery because the researchers have integrated an antenna onto the devices that can be used to deliver power to them.

“We integrated antennas with our devices," Park said. "Thus, the wireless transportation of power and sensing signals was possible with no battery."

While the researchers initially have just demonstrated that the all-carbon flexible sensors can be used as environmental sensors, they intend to look at how the technology can be adapted for implantable and wearable devices.

“In this paper, we just demonstrated the detection of the nerve gas using the biocompatible devices," Park said. "As our future research, we will develop various sensing systems, including diabetes, pollutions and radioactivity, using the wearable electronic devices."

Exosuit That Helps With the Heavy Lifting