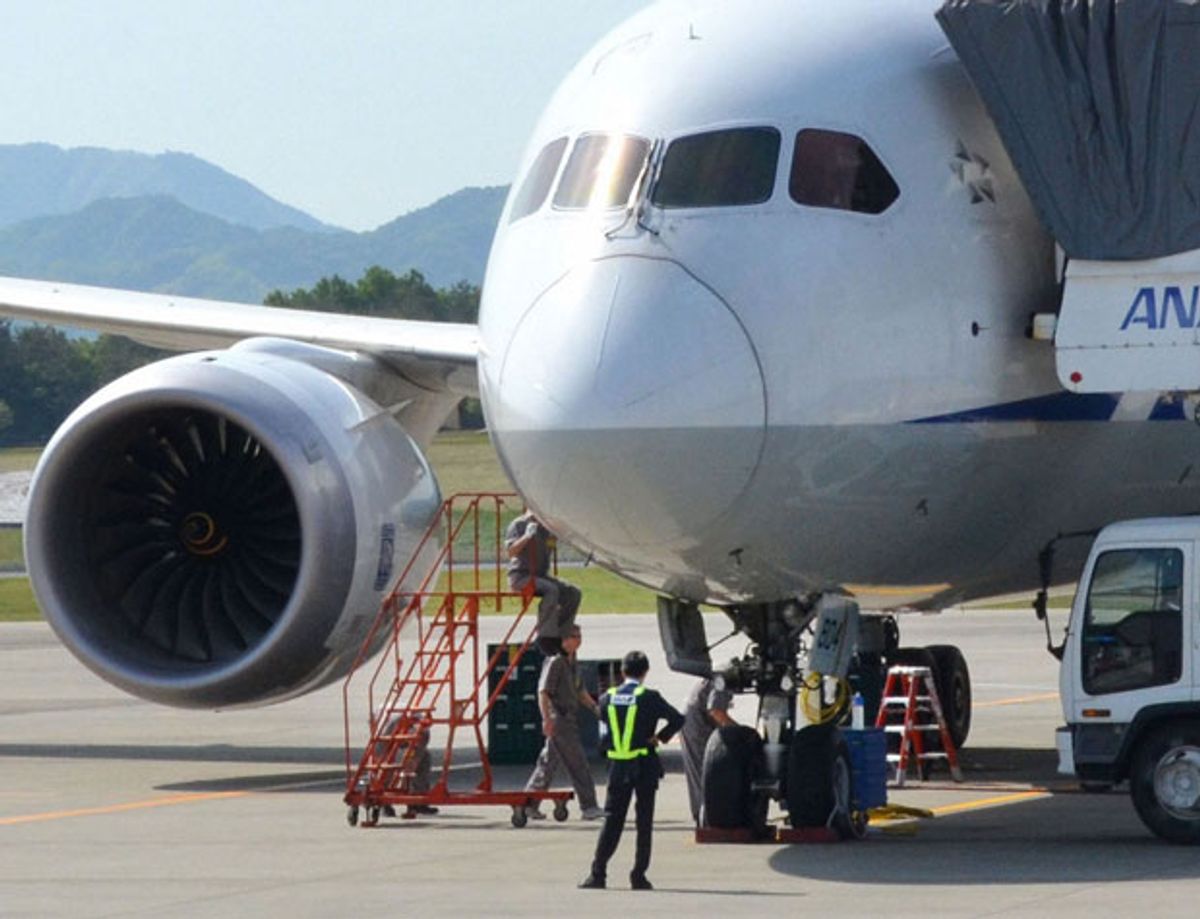 An airline passenger advocacy group has jumped into the fray over Boeing's 787 -- calling for the FAA to scale back the Dreamliner's airworthiness clearance and for an investigation into Boeing's FAA-approved fix to its battery fire problems.

FlyersRights.org, calling itself "the largest airline passenger organization," on Wednesday submitted a formal petition to FAA chief Michael Huerta and Secretary of Transportation Ray LaHood. The group cited expert testimony that questions Boeing's battery fix, now being implemented around the world to get 787s back in the air within weeks. FlyersRights also questioned FAA's giving Boeing the ability to create some of its own regulatory tests for the Dreamliner's lithium ion batteries.

The FAA, FlyersRights president Paul Hudson says, "gave Boeing essentially all the authority to approve their own batteries. And it's backfired. Now there's an interest by all parties to make the best out of that situation. But the public isn't well served by that."

At NTSB hearings  last month, Boeing Vice President and top engineer of the 787 program Mike Sinnett testified that Dreamliner's FAA certification process "was the most extensive effort in our history." However, he also later noted of some of the 787's battery tests, "In retrospect I believe we don't feel that it was conservative enough."

Zuckerbrod says makers of lithium ion batteries work within some of the most stringent quality control standards in industry today. Even still, he says, "They make cells by the billions, and yet the failures are in the hundreds or thousands every year."

So part of Boeing's battery fix is to not just to try to eliminate battery fires but also contain any that might break out. This means, in part, thermally insulating every lithium cobalt oxide cell within the battery's stainless steel container.

Zuckerbrod says he's impressed with the batteries' heavy duty stainless steel housing, which would contain any fire and vent fumes directly outside the plane. (On the other hand, adding in a heavy stainless steel box also cuts back on the main appeal of the batteries in the first place: their high energy density.)

However, Zuckerbrod also notes that insulation between battery cells -- electrically and thermally insulating each cell from one another and the box itself -- could pose a problem during regular use.

"As the cells are used they have to cool off," he says. "If you get above about 90 C or so, if the heat's contained and can't leak out, the battery may begin to self-heat and undergo a thermal runaway."

FlyersRights is requesting an ETOPS rating of no more than 120 minutes flying time (ETOPS-120). Such a move, says George Hamlin, president of the Fairfax, Va.-based Hamlin Transportation Consulting firm, would greatly reduce the transpacific and polar routes 787 could make.

"Boeing has put forth a superior containment so that a fire won't spread to the rest of the plane," says MIT materials chemistry professor Donald Sadoway in a statement for the FlyersRights petition. "The question is this: How long are you willing to fly without full backup power on an aircraft that is 'fly by wire'?"

Hudson, who also sits on the FAA's Aviation Rulemaking Advisory Committee, says Dreamliner should log at least 24 months of trouble-free service before it be allowed to travel more extended ETOPS-180 routes.

Hudson says greater regulatory prudence is not only in passengers' interests but in the industry's and even Boeing's best interests too. After all, he says, Boeing came to dominate the jetliner industry with their flagship 707 in part because the De Havilland Comet—the first commercial jetliner—suffered a string of well-publicized accidents in the early 1950s. The Comet embraced new technologies before those technologies could be mastered, Hudson says.

To Fly a Drone in the U.S., You Now Must Pass FAA's TRUST Test