CREATE AN ACCOUNTSIGN IN
SemiconductorsTopicTypeFeatureSpectrum Collections

Completely Artificial Hearts: Coming to a Chest Cavity Near You

The human heart is a marvel of engineering. Inside the chest of the average adult, that hard-working muscle beats about 100,000 times per day, pumping blood through arteries that branch up toward the brain and twine down to the toes.

So it’s no wonder that biomedical engineers have had a tough time building a mechanical replica to keep patients with heart failure alive and well. Since the 1950s, ambitious researchers have tried to build artificial hearts but have always come up short. Now, four different companies think they’ve found the right technology, and they’re out to prove it. In 2017, clinical trials and animal tests could finally demonstrate that permanent artificial hearts are ready for the clinic.

About 5.7 million people in the United States alone are currently living with a diagnosis of heart failure, meaning their hearts are gradually becoming less effective at pumping blood. Some of the worst-off patients join the waiting list for a heart transplant, but donor hearts are scarce and many people die while waiting. 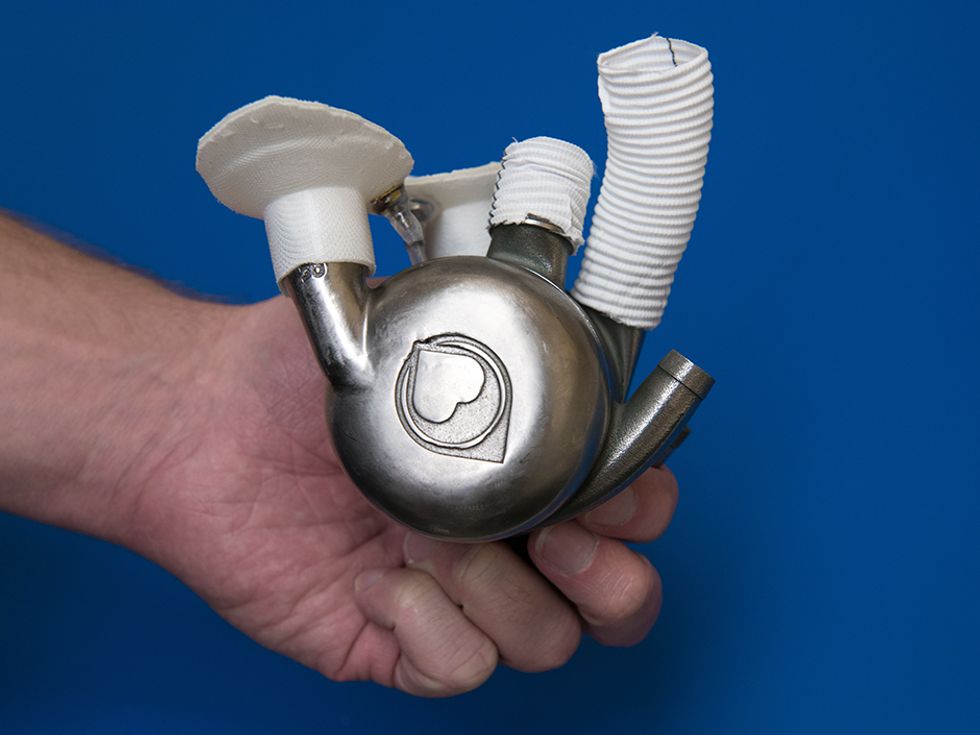 The artificial heart from the Texas-based company Bivacor is currently being tested in calves.

The Total Artificial Heart from Arizona-based SynCardia Systems already has U.S. regulatory approval as a “bridge to transplant,” and now the company is enrolling patients in a clinical trial that’s testing the device as a permanent replacement. SynCardia CEO Michael Garippa says the trial is small—just 28 patients—because more than 1,600 temporary placements have already proven that the artificial heart is safe.

Garippa is confident that the device is durable, too, based on the simplicity of its design. “There’s nothing electronic inside the body of the patient,” he says. SynCardia’s heart has two plastic chambers to mimic the heart’s two pumping chambers, and each plastic chamber is bifurcated by a membrane with air on one side and blood on the other. A patient with a SynCardia heart carries around a 6-kilogram air compressor attached to tubes that penetrate the abdomen to deliver air to the two chambers, pushing on their membranes to propel the blood on the other side. The compressor thumps loudly at a steady rate of 120 times per minute. “It’s not a normal life,” Garippa says, “but it’s way better than these heart failure patients have ever had before.”

Keeping the Beat: Inside the Syncardia heart (top), air pushes against membranes to propel the blood on the other sides. The Bivacor heart (bottom) propels blood with two centrifugal impellers mounted on a common hub, which is suspended via magnetic levitation.GIFs, Top: SynCardia/IEEE Spectrum; Bottom: Bivacor/IEEE Spectrum

In France, a company called Carmat is hoping to do better. “Our system is completely silent,” says Piet Jansen, Carmat’s chief medical officer. Like SynCardia’s device, the Carmat heart also has two artificial chambers with membranes that press outward to pump blood. But instead of compressed air, it uses hydraulic fluid driven by an implanted pump. Carmat’s heart is larger, heavier, and more complex than SynCardia’s device, but its designers are proud of the sensors that determine the patient’s exertion level and the microprocessor that calculates an appropriate and changeable heart rate. Wires emerge from the back of the patient’s neck to connect to a 3-kg battery pack.

Carmat’s first feasibility study seemed rocky: Two out of four patients died within three months. But industry analyst Andrew Thompson, who recently authored a report on artificial hearts, says these patients were extremely sick—as might be expected of people who volunteer for an experimental treatment. “It was not so much a failure of the device as a failure of the body,” Thompson says.

European regulators must have agreed, because they approved the major clinical trial that Carmat launched this past August. The company expects surgeons to implant its devices in about 20 patients by the end of 2017 and hopes that its artificial heart will be certified as a permanent replacement device for Europeans in 2018.

Two other companies not yet at the clinical trial stage have embraced a technical approach that some experts find more promising. Both companies rejected pulsating membranes and instead use centrifugal pumps with whirling, fanlike blades that propel the blood forward, sending a constant flow through the arteries. A device from Cleveland Heart (based on technology developed at the Cleveland Clinic) kept two calves alive and healthy through a 90-day study in 2015. And in Texas, a company called Bivacor is currently conducting 90-day studies with calves in cooperation with the Texas Heart Institute. Both companies are still tweaking their designs and working toward human trials.

Gianluca Torregrossa, a cardiac surgeon who has implanted SynCardia devices and written about the progress of artificial-heart research, is eagerly watching these two companies. Torregrossa says their “continuous flow” designs have fewer points of failure. “If the device has fewer moving parts, you have better chances,” he says.

When it comes to clinical trials, all of the technologies have to prove themselves under very tough circumstances. “Doctors don’t want to refer a patient to a science project unless the patient has no options,” says SynCardia’s Garippa. If the technology works for these worst-off patients, the long wait for a reliable artificial heart may be over. The tryouts of 2017 could finally reveal an engineering marvel made by humans, not by biology.

This article appears in the January 2017 print issue as “A Make-or-Break Year for Artificial Hearts.”

Entangled Photons Can Come Out in Webs Now

Green laser light illuminates a metasurface that is a hundred times thinner than paper.

The equipment that generates quantum entanglement is often bulky and only produces entangled photons a pair at a time. Now scientists have created a device roughly one-third as thick as a penny that can yield complex webs of entangled photons—not just in pairs, but several pairs all linked together.

Now scientists have created a new device roughly one-third as thick as a penny can yield complex webs of entangled photons—not just one pair at a time, but several pairs all linked together. The invention may not only greatly simplify the setup needed for quantum technology, but also help support more complex quantum applications.

Join Teledyne SP Devices for an introductory webinar about the basics and benefits of peer-to-peer streaming and GPU post-processing in data acquisition systems.

Register now for this free webinar!