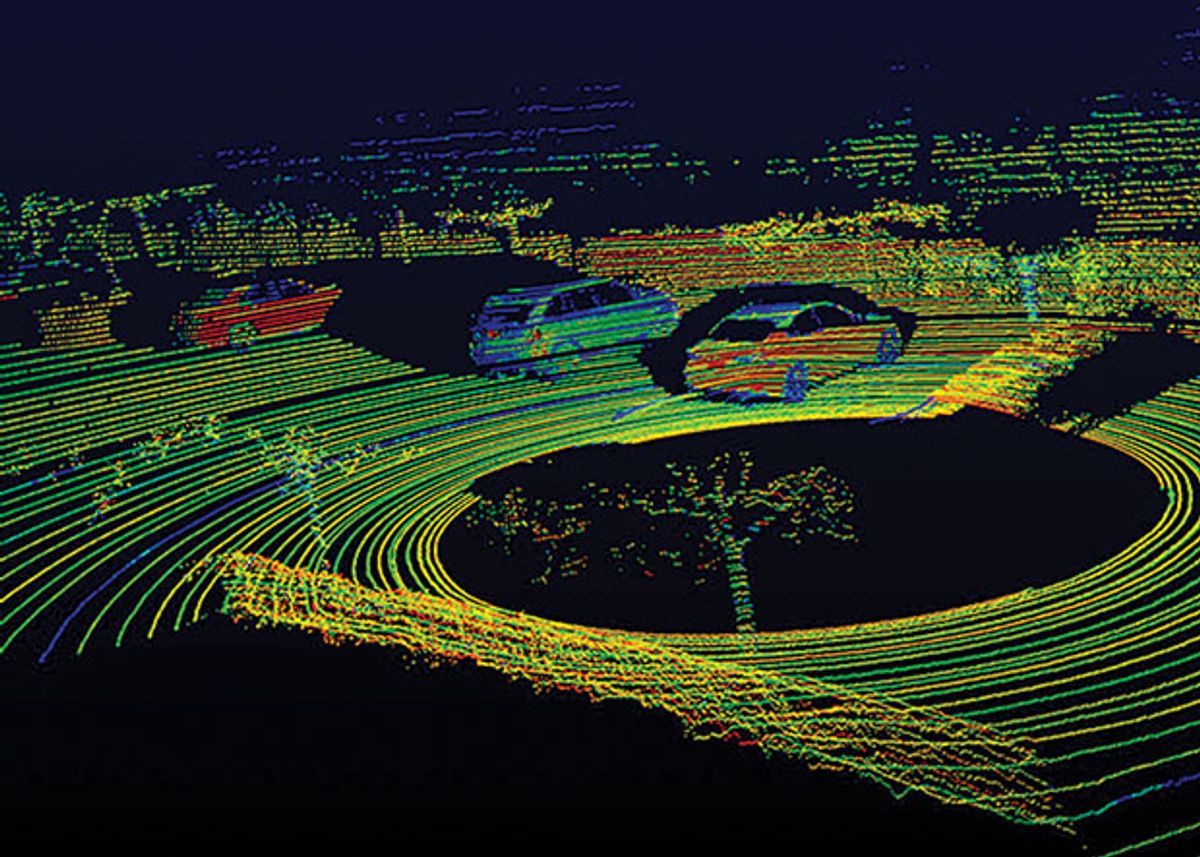 Chances are you’ve never seen a fully autonomous self-driving car out on the street. But if you have, you probably couldn’t help but notice the distinctive spinning sensor adorning its roof. It’s what helps an autonomous vehicle understand the world around it, but it’s also what’s keeping autonomous vehicles from being affordable enough for the average consumer to buy. Lidar (light radar) is complex and expensive right now, but within the next few years, it’ll be cheaper and more reliable—and everywhere.

Lidar is a sensing technology similar to radar that detects objects with pulses of laser light. Though lidar has a shorter range than radar (tens to hundreds of meters), the much shorter wavelengths used by lidar result in a massive increase in resolution. The uniquely reliable and high-quality data that lidar provides has made it the sensor of choice for the majority of vehicle autonomy applications. In fact, many experts feel that lidar is a necessity for driverless cars.

“Lidar is a critical sensor for driverless vehicles because it enables highly precise and robust localization across a wide range of conditions,” explains Karl Iagnemma, CEO of nuTonomy, a ­Cambridge, Mass., startup that is currently testing self-driving cars in ­Singapore. But Iagnemma points out that the size, complexity, and cost of the current generation of lidar sensors are significant obstacles to the commercialization of any technology that depends on them.

Many autonomous cars have relied on the HDL-64E lidar sensor from Silicon Valley–based Velodyne, which scans 2.2 million data points in its field of view each second and can pinpoint the location of objects up to 120 meters away with centimeter accuracy. But the sensor itself weighs more than 13 kilograms and costs US $80,000. This year, Velodyne announced the VLP-32A, which offers a 200-meter range in a 600-gram package. With a target cost of $500 (at automotive scale production), the VLP-32A would be two orders of magnitude cheaper than its predecessor but still too expensive to be integrated into driverless cars intended for the consumer market.

A substantial amount of recent academic and industry research has been focused on making lidar sensors smaller, easier to manufacture, and cheaper. At the CES 2016 electronics show, Quanergy Systems, in Sunnyvale, Calif., demonstrated a prototype solid-state lidar sensor designed for driverless cars. It uses an optical phased array to steer laser pulses rather than a rotating system of mirrors and lenses. Quanergy projects that its sensor will cost $250 in volume production, and it should be available to automotive original equipment manufacturers in early 2017.

Meanwhile, two startups are working on $100 automotive lidar systems they both say will be released in 2018. Innoviz, in Israel, is promising a “high-definition solid-state lidar” with better resolution and a larger field of view than those in existing sensors. Innoluce, in the Netherlands, is using a microelectromechanical mirror system to scan and steer a laser beam instead of the solid-state approach; its engineers claim it will outperform optical phased arrays in both range and resolution.

One of the most exciting recent developments in lidar technology comes from MIT. With funding from the U.S. Defense Advanced Research Projects Agency’s Electronic-Photonic Heterogeneous Integration program, MIT researchers have leveraged silicon photonics to condense a functional lidar system onto a single 0.5- by 6-millimeter chip that can be fabricated in commercial CMOS foundries. MIT’s prototype has a range of just a few meters, but there is a clear development path toward a 100-meter range and a per-chip cost of just $10.

The market for a small and cost-­effective solid-state lidar system is immense. In August, Quanergy closed a $90 million funding round on a $1.59 billion valuation, while Ford and Chinese search giant Baidu jointly invested $150 million in Velodyne. The goal of these investments is to make a $100 automotive lidar sensor available within the next few years.

While the automotive industry represents the largest near-term market for low-cost lidar, the availability of small and inexpensive lidar sensors will benefit many other industries. Lidar in mobile phones will enable high-resolution gesture recognition. Robots with lidar in their fingers will recognize and manipulate objects with more confidence than ever before. And lidar will give drones the data they need to avoid obstacles—necessary for safely performing tasks like package delivery.

This article appears in the October 2016 print issue as “Lidar That Will Make Self-Driving Cars Affordable.”

automotive devices Innoluce autonomous vehicles lidar Quanergy nuTonomy Innoviz Velodyne self-driving cars
Evan Ackerman
Evan Ackerman is a senior editor at IEEE Spectrum. Since 2007, he has written over 6,000 articles on robotics and technology. He has a degree in Martian geology and is excellent at playing bagpipes.
The Conversation (0)
Robotics Type News Topic