In exchange for your undivided attention, the 2018 Cadillac CT6 will drive for you on any highway in the United States 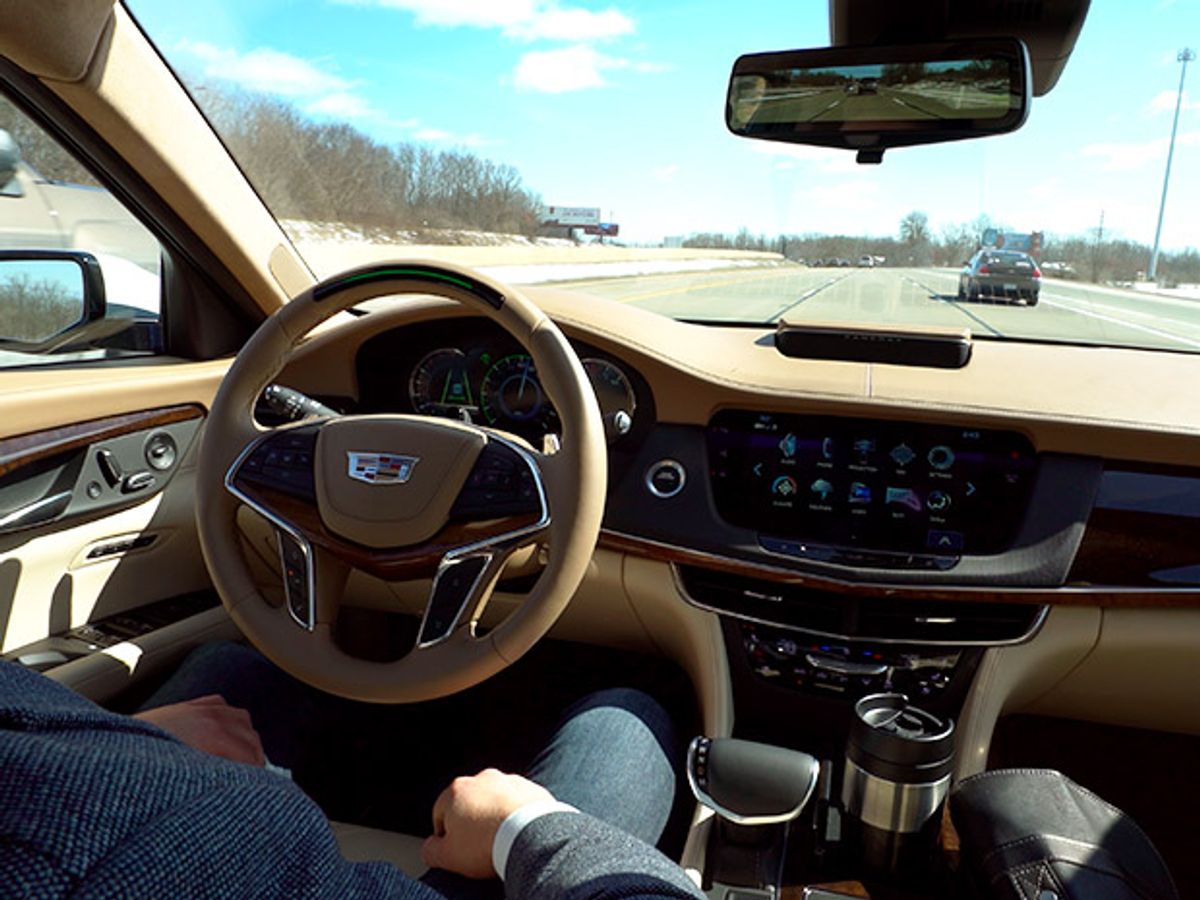 For the foreseeable future, active autonomy for consumer vehicles will be restricted to consistently well-controlled roads, like highways. This is fine, because highways are where autonomy is most desperately needed: When driving long distances you're much more likely to zone out, get tired, get distracted, and get into trouble. In its 2018 CT6, Cadillac is introducing "Super Cruise," which will provide Level 2 autonomy on any highway (defined by on- and off-ramps) in the United States. It uses cameras and radar, along with an innovative (and very strict) system that makes sure that the driver keeps paying attention, although having hands on the steering wheel is optional. Put all of this together and you get "the industry’s first true hands-free driving technology for the highway," according to Cadillac.

Cadillac is technically correct here—Tesla (and other cars with similar highway autopilots) generally require that the driver keep his or her hands on the wheel or the company will get upset. Cadillac is instead is relying on other, arguably more aggressive technologies to make sure that the driver is continually paying attention, a requirement for Level 2 autonomy. Level 2 means that the car can drive itself, but the driver must be prepared to take control at any time with no warning, as opposed to Level 3, where the car can drive itself and the driver can stop paying attention, since the car gives the driver enough time to take up and take over when it becomes necessary.

Making sure that the driver keeps her or his attention focused on the road while the car is driving itself is a challenge, since the driver is continually tempted to do the exact opposite. Cadillac has decided to take a much more proactive approach than most other companies, by monitoring the attention of the driver directly with a small camera on the steering wheel column. Infrared illuminators help the camera to track whether your eyes are actually on the road, and if you stop paying attention, the car will escalate through a variety of alerts:

If the system detects the driver has turned attention away from the road ahead for too long, it will prompt the driver to return their attention to the road ahead. If the driver does not immediately refocus on the road, Super Cruise™ will continue to safely steer until a further escalation of alerts prompts the driver to resume supervision. If the system determines continued inattentiveness, a steering wheel light bar guides the driver to look at the road or take back control of the wheel. Additional alerts can include visual indicators in the instrument cluster, tactile alerts in Cadillac’s Safety Alert Seat and audible alerts, if necessary. In the limited event of an unresponsive driver, the Cadillac CT6 utilizes the full capability of onboard driver assistance technologies to bring the car to a controlled stop and contact OnStar to alert first responders, if necessary.

An autonomous driving system that insists on the driver paying attention to the road is an inherent conflict with Level 2 autonomy. At Level 2, the car is saying, "Oh yeah, I can totally drive myself on the highway and you can relax. It'll be great! Except please don't relax, because I can't promise you that I can drive myself on the highway and you might have to rescue me." The better a car is at Level 2 autonomy, the more dangerous it can be for the driver, as Toyota's Gill Pratt pointed out when we spoke with him at CES:

As we improve the technology for autonomous cars, they’re going to require human intervention less and less. And this will exacerbate the over-trust problem, because the tendency will be that people will say, “It hasn’t needed me before, it doesn’t need me now, so it will never need me.”

In some ways, the worst case is a car that will need driver intervention once every 200,000 miles. And so an ordinary person who has a car every 100,000 miles would never see it. But every once in awhile, maybe once for every two cars that I own, there would be that one time where it suddenly goes “beep beep beep, now it’s your turn!” And the person, typically having not seen this for years and years, would completely over-trust the car and not be prepared when that happened. So we worry about this paradox: The better we do, the worse the over-trust problem could become. — Gill Pratt, Toyota Research Institute

As far as the technical details on how Cadillac is managing its highway autonomy, we did learn a bit more than what was available in the press release. The release makes a big deal out of the fact that Cadillac has "the first assisted driving technology that will use precision lidar map data in addition to real-time cameras, sensors and GPS."

Data from on-board cameras, GPS and radar sensors is a key component of most assisted driving systems. Super Cruise™ adds to this formula using advanced laser technology in development for future autonomous vehicles: a LiDAR-scanned map database. The precision LiDAR map was developed specifically for Super Cruise™. Engineers mapped every mile of limited-access highway in the U.S. and Canada, providing detailed information to the car about the road ahead. This pairs with improved accuracy GPS, measuring real-time location in a fashion four to eight times more precise than traditional GPS.

Sounds cool, but the CT6 doesn't actually have any lidar sensors on it (just cameras and radar), meaning that it can't really do any of the things that make lidar useful for AVs, like localization, obstacle detection, or object recognition. Instead, the lidar is used to make a sort of enhanced GPS map, providing the vehicle with some very basic information about the road ahead, like grade and curvature. I'm not sure how much information that the lidar map gets you that a GPS-based map doesn't, but the fact that Cadillac has collected (and, we assume, is continuing to collect) lidar maps like these will certainly come in handy eventually.

We asked about how well the system performs at night, in bad weather (rain or snow), in dust and fog, and at low sun angles (like driving directly into a sunrise or sunset). It sounds like driving at night is no problem, but anything that occludes the cameras (rain, snow, dust, fog) could cause the system to deactivate. These are all circumstances that can arise very abruptly: For example, if you're passing a truck on a highway in the rain, it can throw up a massive sheet of water that brings visibility down to close to zero for a second or two. As a driver, you'll need to be prepared for situations like these, and some of them might not be obvious, such as if you're driving north or south near dusk and the road suddenly turns west, and you (and your car's cameras) get a faceful of sunlight head-on. These are just two examples of why the driver needs to be paying attention at all times.

To be clear, these challenges are not unique to Cadillac, and autonomous vehicle companies in general are still trying to figure out (among other things) whether lidar is a necessary sensor, what's required for safe Level 2 autonomy, and whether Level 3 autonomy is a realistic goal. We're excited to see how Cadillac's system handles itself, and looking forward to finding out what they've got planned for the future.