Bruno Putzeys: The Sound of Music 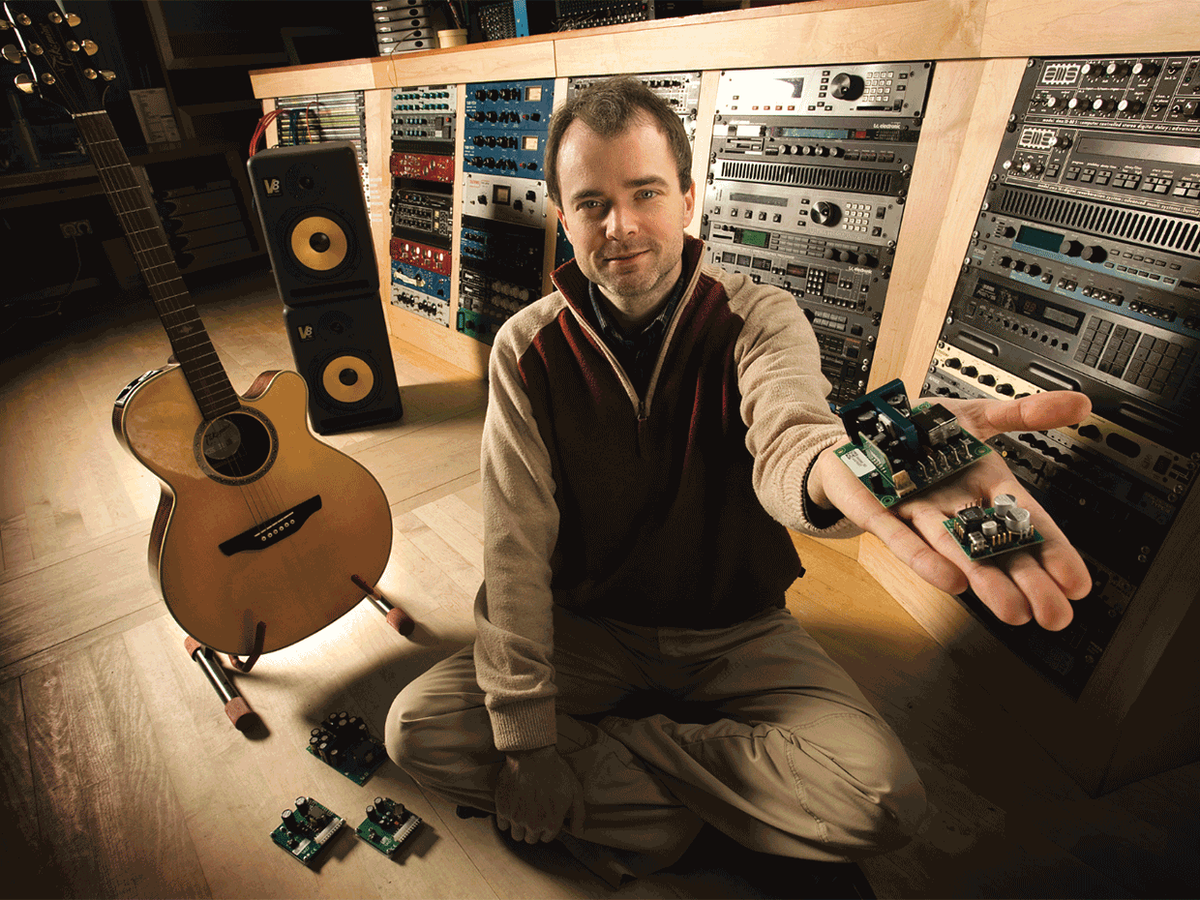 “A guy came up to me, talking about me without realizing I was me,” he laughs. “Then he saw my name tag, and he said, ‘Oh, awesome meeting you.’ He shook my hand, and then he hurried off!”

Putzeys is one of the world’s top designers of a type of audio amplifier known as class-D. These ultraefficient models are already dominant in multichannel sound systems, portable media players, cellphones, car stereos, and computers. Lately they’ve made inroads into the ostentatious world of high-end audio, where a component can cost tens of thousands of dollars. Their success there is due mostly to Putzeys.

In 2001, while working at Philips Applied Technologies in Leuven, Belgium, Putzeys designed a compact, versatile class-D amplifier module that he called UcD, for “Universal class-D.” Over the past few years, dozens of amplifier models, with prices ranging from US $500 to $8500, have been built around Putzeys’s modules, which are now manufactured by Hypex Electronics of Groningen, Netherlands. The amps have received mostly ecstatic reviews.

For Putzeys, the success of the UcD boards has conferred professional freedom that’s pretty rare for a 34-year-old EE. In May 2005, he followed his modules to Hypex, where he is now the chief tech guru. He lives and works in a two-story building in a picturesque suburb of Leuven. The first floor is his laboratory; upstairs are his bedroom, a small kitchen, and a spacious living room with his main audio setup dominating one wall.

Putzeys’s love of audio electronics began when he was 16. A friend of his father’s stopped by the Putzeys home in Herent, Belgium, with an amplifier built around two pairs of EL84 vacuum tubes in push-pull configuration. Its sound bowled over the youngster: “I thought, This thing can give me a sense of the music that the other amps can’t.” He taught himself how to design electronic circuits with tubes, a really odd activity for a teenager in the late 1980s.

After high school, he enrolled at the National Radio and Film Technical Institute in Brussels, from which his father had graduated in 1963 (the school has since been merged into the De Nayer Instituut). While there, he became intrigued by class-D audio and did his thesis on it. After he graduated in 1995 with a bachelor’s degree in electrical engineering, Philips, the Dutch electronics giant, which had sponsored his thesis work, offered him a job.

Within a few years, he’d succeeded in “annoying all the managers” until one of them agreed to let him take charge of the testing of a class-D audio IC being designed elsewhere in the company for a television set.

He didn’t think much of the chip. “If you give me one month,” he told his bosses, “I will make something out of discrete parts that will be much better.” He made good on his promise. In three weeks, he built a 25-watt class-D amp with better performance than that of the IC amplifier a four-man team had labored over for two years.

In 2001, Philips executive George Aerts secured some research money so that Putzeys could further refine his class-D design. The goal was an amp module that would be versatile and easy to manufacture. It had to be compact and have the same output impedance and power-supply requirements as a conventional amp. And it had to be cheaper and sound better. “The idea was that there would be no excuse for not using it,” Putzeys recalls.

What he does: designs amplifiers and other audio electronics.

For whom: Hypex Electronics and Grimm Audio

Where he does it: Belgium and the Netherlands

Fun factors: Lives and works in the same building; listening to music is part of his job; travels widely to conferences and recording studios.

This time, it took him eight months. He went through four generations of circuit boards without listening to any of them. Instead, he connected each board to an audio analyzer and then rejected it because the results weren’t what he wanted. The fifth iteration, though, looked good. Just before Christmas 2001, he brought a pair of the amps home and connected them to the speakers in his living room. He put on a CD of Spanish classical music and selected a song by the 18th-century composer Juan Francés de Iribarren, “Viendo que Jil, Hizo Raya.” He settled back in a chair and listened. It took him just a few seconds to reach a conclusion: “Straight in the bull’s-eye.”

At a visitor’s request, he re-creates the event, with the very same CD and stereo components. The music begins to flow from the speakers, and Putzeys's eyes seem to unfocus, like he’s lost in thought. There’s a little grin on his face. The sound is extremely transparent, neutral, and precise, with a lovely warmth and force in the vocals.

In an engineer’s universe, Philips would have embraced Putzeys’s UcD module, incorporating it into countless products. In the actual universe, the module basically fell through the cracks. But in April 2003, a young entrepreneur named Jan-Peter van Amerongen visited Putzeys at Philips. Some years before, van Amerongen had started Hypex Electronics, to supply amplifiers and other gear to makers of active speakers and to recording studios. He had heard great things about the UcD.

Ironically, the one thing he didn’t want to hear, at least initially, was music amplified by the module itself. Much like Putzeys when he was designing the modules, van Amerongen wanted to look at the amplifier's output waveform. “The only thing he wanted to see was the output signal on an oscilloscope,” Putzeys recalls. “He looked at it, and in about one minute he said, ‘Okay, I want to buy a license.’ He had seen so many dreadful outputs, full of RF hash. He could tell from the signal whether it was well designed.”

Not long after, Putzeys left Philips for Hypex, where he has pretty much free rein to explore the boundaries of class-D. Just “for fun,” he recently designed an audio amplifier with 0.0003 percent total harmonic distortion, at full power, amplifying a 20-kilohertz signal. That figure is more than 1000 times better than some very good solid-state amps. In fact, it’s an improvement that no human ear could detect. But that figure is also about 30 000 times better than that of some tube amps—a difference that’s not beyond the ability of human ears to detect.

Besides his gig at Hypex, Putzeys is also one-fourth of a Netherlands-based start-up called Grimm Audio, in Utrecht. It specializes in high-end components for recording studios.

Outside of work, he finds time to maintain a very long-distance relationship with a woman who lives in Rwanda. He lectures at conferences around the world. And when he can, he listens to his own stereo setup, a unique assemblage of components he built himself, heavily tweaked, or received as prototypes. The system is marvelous, if ungainly. And it exemplifies Putzeys’s credo about hi-fi.

“Stereo replay never actually reproduces a musical event,” he says. “The only thing you can hope for is a credible illusion. But it can be a very nice illusion.”

A longer version of this article is available.