British Highway Will Recharge Your Batteries as You Drive

System will use inductive coils buried under the pavement, much like a Korean tram system we detailed two years ago 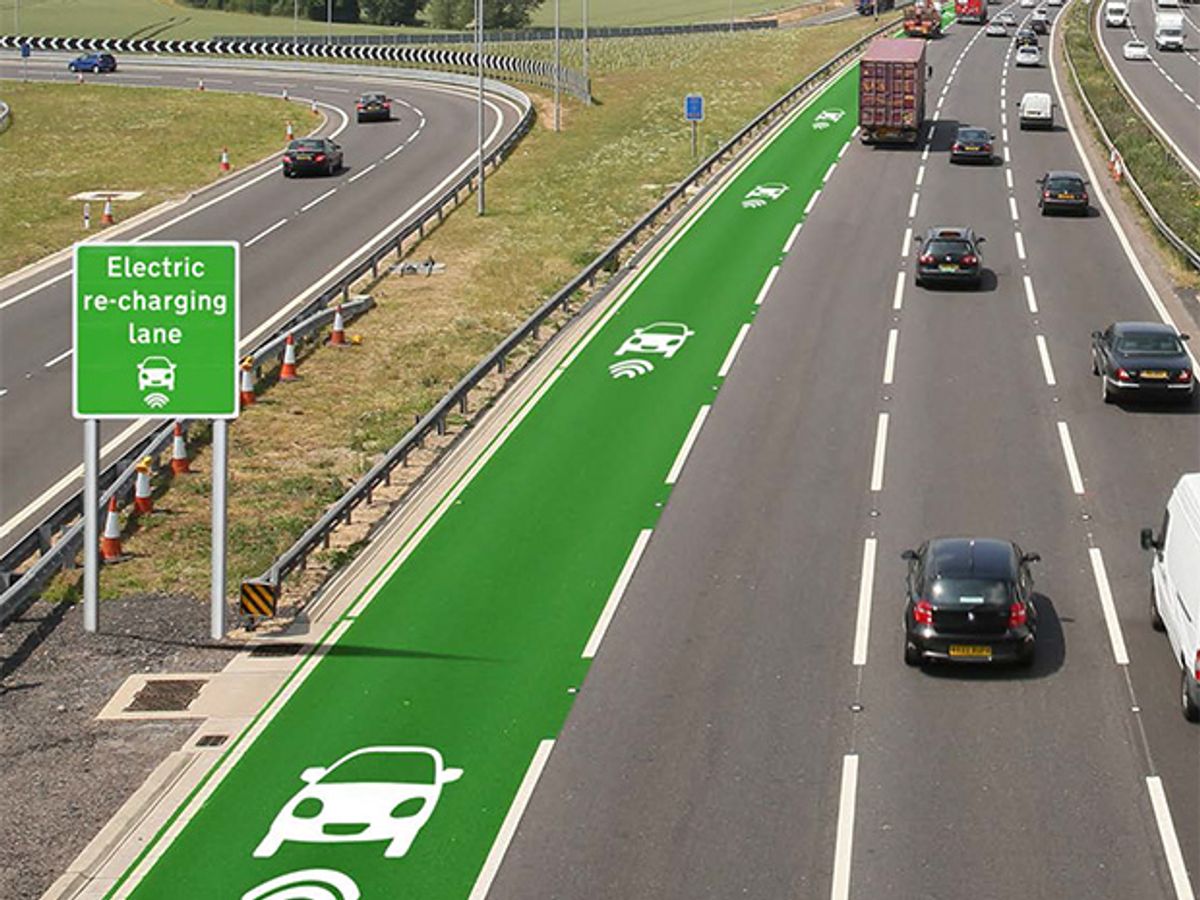 Smart roads can be smart in many ways—say by anticipating traffic jams or by conversing with a car’s autopilot to improve safety.

They can also converse with your car’s battery to transfer power to it. It’s a scheme known as magnetic resonance coupling, and it was pioneered in a small Korean tram system  two years ago, as IEEE Spectrum reported at the time. Now Britain is planning a pilot project using the same idea. It’s to begin later this year, and if it proves out, the government says it will proceed with tests on actual roads.

The point is to overcome range anxiety—the driver’s fear that he might not make it to the next recharging station—and to save the half hour or more that conventional recharging requires.

Engineers have toyed with wireless charging for more than a century, but most such schemes lose too much power in transmission and require impractically short gaps between the pavement and the car. Magnetic resonance coupling solves both of these problems, as the Spectrum article explained back in 2013:

A familiar illustration of the power of resonance is that of the opera singer and the wine glass. As the diva warbles, the acoustic waves hit the glass, causing it to vibrate; if she hits the note with the same natural frequency as the glass, each cycle will amplify the vibrations until finally they are strong enough to shatter the glass. The singer’s voice enters into a special relationship with that glass, passing more energy to it than to other, nonresonating items in the room. Similarly, when a transmitting coil sends electromagnetic waves tuned to a frequency matching the resonance of a circuit holding a receiving coil, it will transfer energy to it very efficiently.

An electric car can draw power by establishing resonant coupling between the electromagnetic field of the buried transmitting coils and that of the pickup coils under the car. Efficient resonance happens when the transmitter’s frequency is tuned to the pickup circuit. Illustration: James Provost

The Korean researchers were able to achieve an average energy transfer efficiency of 75 percent while holding the body of the vehicle a full 20 cm above the road. So, it works.

But the 200-kilogram gorilla in the room is the cost. The Korean project was a small, closed-loop tram that operated continuously. But cars generally go for short distances and only occasionally test the limits of their range. They also spend most of their time parked, when recharging is a breeze.

Does Britain really need to spend tens of billions of pounds on infrastructure to help the odd electric car go a long distance without the inconvenience of stopping?

How to Prevent a Power Outage From Becoming a Crisis