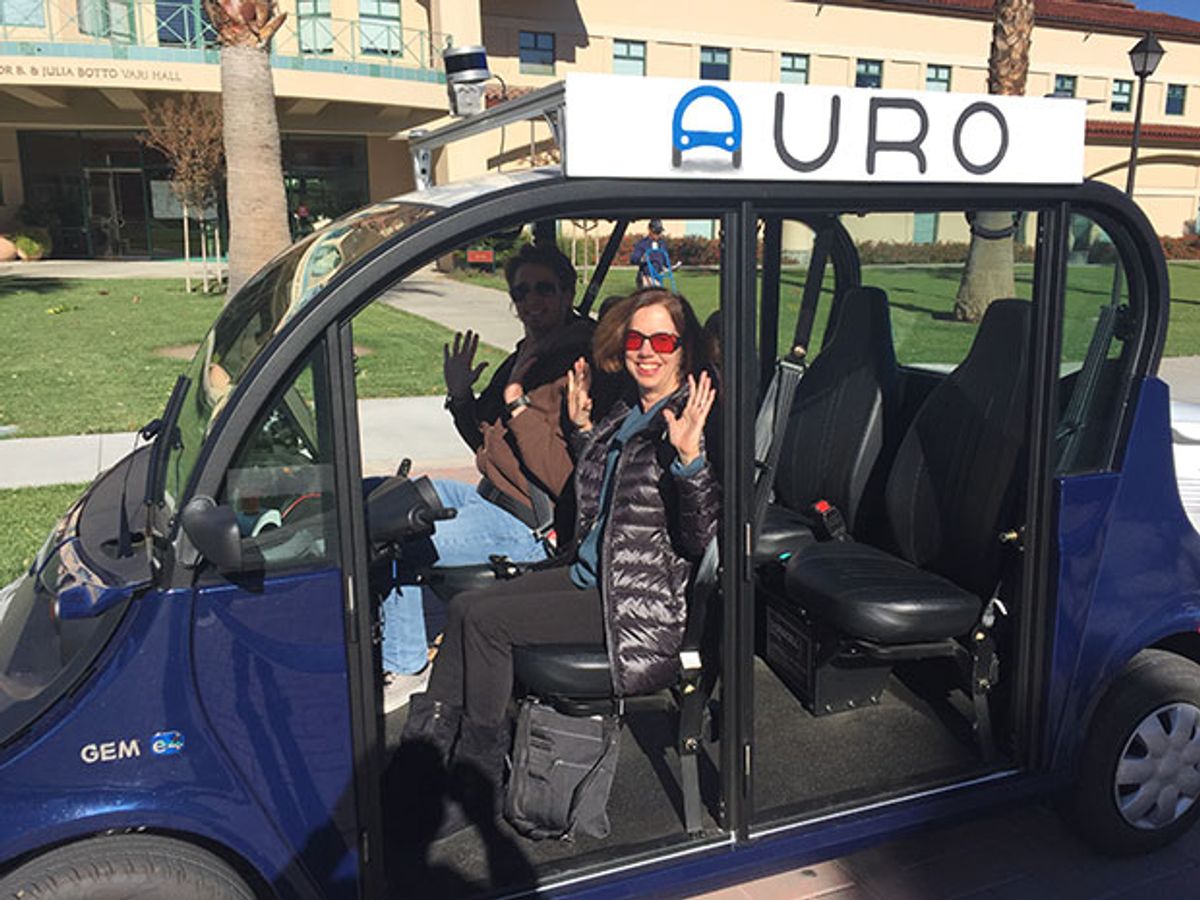 It’s pretty much a driver’s nightmare. Santa Clara University’s campus is crisscrossed with wide pathways—most of them off-limits to normal automotive traffic other than campus service vehicles. So squirrels, pedestrians, and students riding bicycles and weaving around on skateboards rule. I certainly wouldn’t want to have to drive it and have to be on constant alert, thinking: Is that skateboarder, to my right, about to cut across the path? Did this student staring at her phone really just stop right in front of me—in the middle of the path? And what is the kid, to my left—the one on the bicycle who just popped out from behind a clump of students to speed around them—going to do next?

But even though I’m in a small shuttle running its regular route around the campus, and I’m positioned in what would normally be the driver’s seat, I don’t have to worry about any of that. Santa Clara University is using an autonomous vehicle from Auro Robotics on the route for eight hours most days, three hours on Sundays. The Auro shuttle is a boon to students and faculty members with mobility issues, and is more generally popular on rainy days. On the sunny, cloudless day I rode along, the students preferred to walk, and shuttle passengers were more typically campus visitors. Auro tested the shuttle without passengers for a year, before making it fully operational on 14 November. For now, an Auro field engineer rides along as a backstop, ready to take control if the shuttle has to figure out a way around a badly parked delivery vehicle blocking one of its stops or faces some other anomaly. “We are confident that our technology can do path planning in real time,” Auro hardware engineer Ben Stinnett told me, “but we need to get the university to share that confidence.” Over the next few months, he expects that Auro will be gradually transitioning to remote supervision, that is, an off-campus operator who gets an alarm if intervention is needed and can then tele-operate the vehicle. Eventually, Auro expects one operator to be able to be the human backup for fleets of the shuttles. What will stay on board will be a large, impossible to miss, emergency stop button. It’s now on the dash, but will eventually be moved so that it’s within reach of all passengers.

While the Auro shuttle doesn’t move fast—campus rules limit vehicle traffic on the pedestrian paths to 7 miles per hour (11 km/h)—the environment is a tricky one. Stinnett points out the squirrel cam, a small lidar at the bottom of the front bumper, as one adaptation. But darting squirrels aren’t the only challenge.

“We have seen people bail off of longboards right in front of the vehicle,” he says. “So the big obstacle being tracked becomes static, while the longboard keeps moving.”

The Aero engineers are taking advantage of these complexities to make their software smarter. Right now, the software that is actually controlling the self-driving vehicle takes information only from on-board LIDARs. However, the company is gathering data from on-board cameras and using it as part of a deep-learning project aimed at interpreting pedestrian intent.

Coming soon to Aero’s Santa Clara shuttle, Stinnett says, is an Uber-like smartphone app that will be rolled out to as many as 50 students and faculty members (mostly mobility impaired), who will be able to call for the shuttle on demand instead of waiting at one of its normal stops. The company also expects to expand the route, adding more stops closer to student housing. Currently, its stops are limited to the campus parking garage, the university entrance, and a couple of the school’s main buildings.

Aero will also start operating shuttles at three other campuses (exactly where is not yet public) in March or April 2017. The company doesn’t plan to sell the shuttles to the universities, but will continue to operate them as a sort of subscription service, covering insurance, maintenance, and other costs for a flat rate.

During my rides, it was clear that the students are used to the Aero—so used to it that they don’t even think about getting out of its way. That can lead to a somewhat frustrating ride as the vehicle patiently trails a slow-walking student; it has a horn, but is too polite to beep. Visitors to campus, however, are at first puzzled, then thrilled, to learn that they are being chauffeured in a car that is driving itself. (See video, above.) And if you’re in the area, and have never had a ride in an autonomous vehicle, just stand in front of the parking garage for a while—the shuttle won’t ask to see your ID.