Audi Pixelated Laser Headlights Light the Road and Paint It Too

By breaking laser light into tiny sub-beams, you can spare opposing drivers' eyes and even display signs on the roads 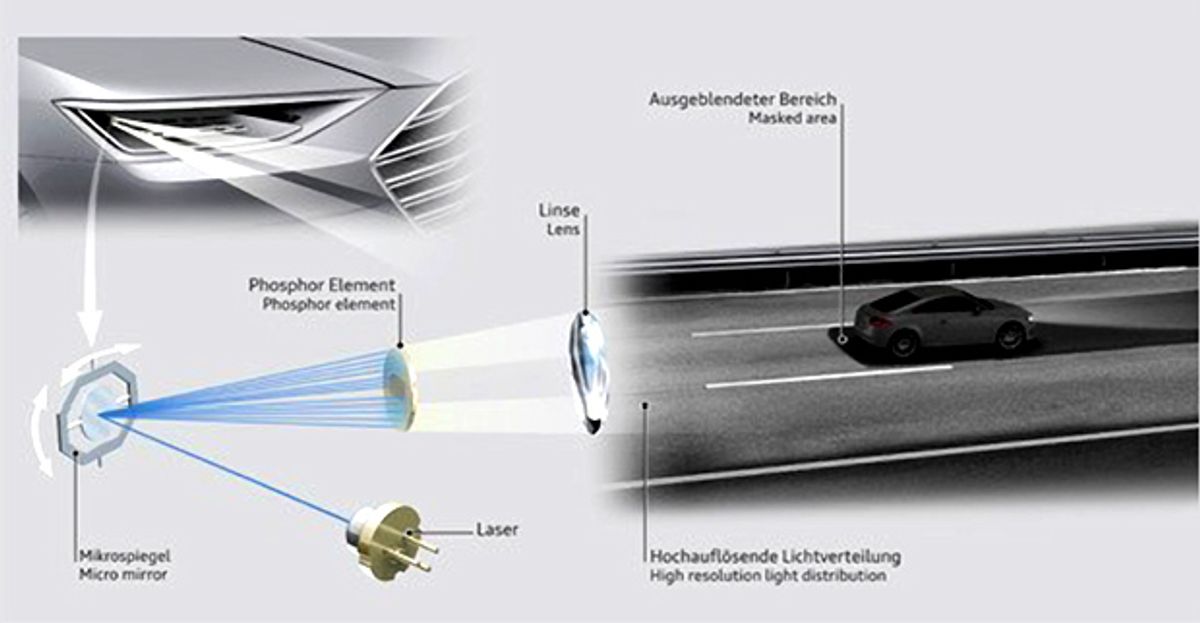 Audi’s new Matrix Laser headlights have wowed LeMans racers and may soon do the same for European drivers. But archaic regulations will keep Americans in the dark for now.

Lasers are the brightest, whitest lighting yet, better than the light-emitting diodes that only recently took over in cars, and because they can be directed just where you want them to go, they are in principle more efficient, too. That fine-pointed precision also opens up all kinds of possibilities for intelligent automated functions, notably projecting images onto roads.

Audi and BMW have publicly vied to be first in showrooms with laser headlights. After years of prototype development, BMW rushed to claim victory by delivering eight laser-equipped, i8 plug-in hybrid cars to customers in a Munich ceremony last June. Audi followed with a limited, 99-unit run of its 2015 R8 LMX supercar, their high beams supplemented by phosphor-pumping blue laser diodes that illuminate the road at twice the distance of that LED’s can manage—and at a daylight-mimicking color temperature of 5,500 Kelvin.

Now Audi is bringing out its Matrix Laser headlights, which incorporate a digital micromirror—an array of hundreds of thousands of tiny mirrors that reflect light from multiple laser diodes. (As in many white-light laser systems, the diodes flash blue light through a phosphor, which converts some of it to lower frequencies, producing a mix of colors that blends to white.)

Each mirror can be tilted up to 5,000 times per second, breaking the beam into pixels that can hit the roadway and also highlight traffic signs. By analyzing the feed from onboard cameras the system can steer the light away from the oncoming traffic. That way, this highest of all high beams can’t blind other drivers.

Because the pixelated light can be combined to form images, it can even project turn arrows or other helpful graphics onto the roadway. At low vehicle speeds, light can be projected over a larger projection area; as speed increases, the aperture angle automatically narrows to boost visible range and intensity.

So equipped, a driver could leave high beams on permanently and gain maximum full-time illumination, while relying on the masking function to avoid dazzling other drivers. That’s less obtrusive than forcing drivers to constantly switch high beams on and off, or having the car do it when it detects approaching traffic.

Why, you may ask, would you want to create images on the road when you can just represent them virtually, via a head-up display? For one thing, the direct approach lets you communicate with people. Imagine projecting a ghostly path of footprints for a pedestrian to follow when it’s safe to cross, or painting the word “STOP” on the pavement when there’s danger afoot. Active illumination of lane markings, or a feature that “measures” and displays the Audi’s width to comfortably pass trucks or squeeze through tight spaces, are other potential apps.

The Matrix Laser unit is the fruit of a three-year project sponsored by Germany’s federal education and research ministry, which partnered Audi with Bosch, OSRAM Licht AG, and the Karlsruhe Institute for Technology. It will get a real-world test at this summer’s 24 Hours of LeMans, on Audi’s latest R18 e-tron quattro hybrid racecar. The laser high-beam made its debut at last year’s race, where two-time 24 Hours of LeMans winner Marcel Fässler enthused over its performance, saying the brighter, more-precise light delivered a clear advantage for Audi pilots.

Audi won’t say when Matrix Lasers will light up showrooms, but the robust competition with BMW suggests that top-shelf Audis will get them soon enough—at least in Europe. As ever, regulators in the United States seem behind the curve: they still enforce a circa-1968 rule that prohibits high beams that can’t be manually switched off. An Audi spokesperson said the company is working closely with the National Highway Traffic Safety Administration (NHTSA). But the agency isn’t yet sold on the safety benefits, preferring to wait and watch Europe before it signs off.

This has all happened before: European drivers enjoyed halogen headlights for roughly a decade before NHTSA finally approved them in 1983. So Yanks might be in for a wait.

The Mini-LED Is the Future of Big Displays

A Century Ago, the Optophone Allowed Blind People to Hear the Printed Word