CREATE AN ACCOUNTSIGN IN
The Institute Type News Topic

Artificial Sunlight Gets a Boost from LED Windows 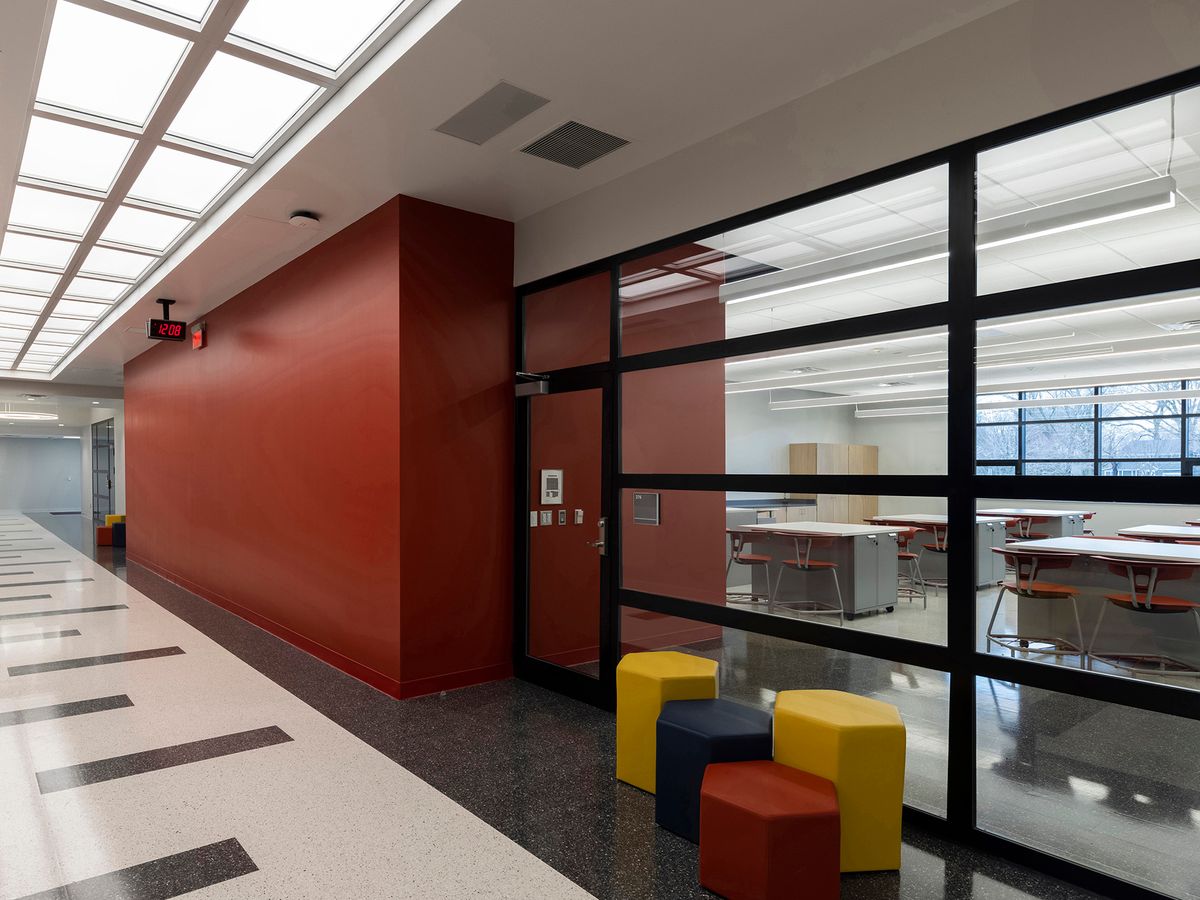 THE INSTITUTE Humans have long relied on candles, gas lamps, and other artificial light to illuminate indoor spaces. Things went into high gear in the early 20th century as incandescent lighting was adopted. Incandescent sources revolutionized building design, enabling apartment buildings and office towers to grow taller because windows did not need to bring in as much natural light.

But constant exposure to artificial light might not be particularly healthy. Unlike sunlight, incandescent lamps and fluorescent tubes do not radiate the full spectrum of colors that humans need to keep their biological rhythm in sync with the Earth’s cycles of day and night.

Over time, the lack of color change in artificial lights, such as incandescent and fluorescent, has unnatural consequences for circadian rhythms. Our circadian system cannot be synchronized to its 24-hour rhythm under light without any specific correlation to a given lighting technology. Mounting evidence of not synchronizing our day-night rhythm shows a risk of breast cancer, and the problem also can lead to gastrointestinal issues, cardiovascular disorders, a lack of sleep, and mood issues.

Light-emitting-diode technology has provided an opportunity to remedy matters. By adjusting color, brightness, and intensity, programmed LEDs can create a dynamic environment throughout the day that maintains the human body’s circadian rhythms.

The biological impact of circadian lighting has been proven by researchers at Harvard,Thomas Jefferson University, and the Lighting Research Center at Rensselaer Polytechnic Institute among others.

Exposure to natural light can influence our circadian rhythms and sleep patterns as well and can affect mood in several ways. For example, light directly modulates the availability of neurotransmitters, which are the chemical messengers to targets such as muscles and glands. Also, it has been medically proven that exposure to natural daylight can affect the duration of sleep and improve sleep quality. Health care providers are increasingly exploring circadian lighting.

The lighting industry is working to design systems that can follow humans’ natural sleep and wake cycle. Some of the major players are Circadian ZircLight, Philips, Trilux, and Versa Technology.

The idea has even made it to space. NASA launched LEDs with variable settings to the International Space Station a few years back to help with astronauts’ circadian rhythms.

The current approaches for implementing a circadian lighting system are intensity tuning, color tuning, and stimulus tuning. With intensity tuning, the brightness of the light fixture is adjusted through a controlled dimming system to a lower intensity in the morning, a higher setting during the afternoon, and a lower intensity in the evening. With color tuning, both intensity and color temperatures are controlled to mimic the day/night experience.

Stimulus tuning was introduced to adjust the blue wavelength to limit melatonin suppression without changing the color temperature. This approach was found to be the most effective when paired with intensity tuning.

Although the three approaches can effectively create a dynamic lighting environment throughout the day, they still use traditional fixtures.

These before and after pictures illustrate how another type of light array from Lightglass, called WallGlass, is used to brighten up the lobby of an office located in a basement. Lightglass

A new approach being taken by the lighting industry involves dynamic fixtures that look like real windows, skylights, and doors but that use LED technology.

To learn more about the emerging technology, I recently spoke with Sean Darras, chief executive of Lightglass, a lighting company in Philadelphia founded in 2012, when LEDs were beginning to gain traction. In 2019 Darras and his team invented  manufacturing method and form light fixture that combines window-construction principles with circadian-rhythm LED technology. Their Lightglass products look and feel like windows but produce light that changes color and brightness to mimic the cycles of the solar day.

Before Lightglass, designers would build a custom light box to simulate a window. They would use a light source from one manufacturer, a diffuser from another, and a glazing system from a third. Contractors then assembled the components into a faux window.

That approach was risky, however, because it required coordination of multiple manufacturers and tradespeople, leading to issues with installation and maintenance.

Lightglass products, on the other hand, are fabricated by a single manufacturer, says Benjamin Rapkin, director of growth for Lightglass.

The aha! moment for Darras came when the team considered a typical window frame construction as the delivery agent of the circadian LED technology, instead of a traditional light fixture.

The team’s aluminum frame mimics the construction and build of a traditional window. It is recessed into a wall and connected to sensors that read the exterior lighting environment. A photo sensor is installed on the building’s exterior to capture sunlight. In the morning the window frame produces warm and dim light to mimic a sunrise. By noon the frame slowly brightens to a cool white, like the sun shining at full intensity. In the evening, the color gets warmer and starts dimming to prepare our bodies for sleep.

The Lightglass infinity edge, Darras says, gives the viewer the sense that the daylight continues infinitely. By recessing a Lightglass window or skylight frame into a wall or ceiling, he says, the product can transform light-deprived basements and internal rooms into brighter, circadian rhythm–controlled environments.

At Caldwell High School in Texas, for example, Lightglass frames act as punch-out windows: They look as if they’ve been punched individually into the side of the building. Lightglass frames are installed around the perimeter of a vaulted ceiling at the center of the school’s library. Recessed into the wall, the windows change color and intensity throughout the day to match the sunlight outside.

The company installed active circadian-lighting applications in the patient-observation rooms at a children’s hospital in Philadelphia. The system uses automatic time clock–based controls connected to a sensor that reads the conditions outdoors. The entire windowless observation department changes intensity and color temperature throughout the day, Darras says, emulating the sunlight cycles outside.

The award-winning design in lighting control innovation was a breakthrough for Lightglass, he says, because it offered the first practical solution of bringing the experience of daylight to windowless rooms.

“We are proud to know that at this very moment, a family going through a difficult time is at least a little more comfortable because of our work at the hospital for children,” Rapkin says.

According to a report from research firm Global Market Insights, the human-centric lighting market exceeded US $1 billion last year and is expected to grow at an annual rate of 25 percent between now and 2027.

The circadian-lighting segment is less than 5 percent of the total interior architectural lighting market, Rapkin estimates, but it is growing quickly.

“We are still in the very early adoption stage of lighting for health and well-being,” he says.

This article was written with the help of Frank Neidhardt, a lighting consultant for more than 35  years and CEO of Milkjug, a lighting design boutique, in San Antonio, Texas.

This article has been changed from an earlier version.

IEEE Senior Member Qusi Alqarqaz is an electrical engineer with more than 28 years of experience in the power industry. He is a contributor to The Institute and serves on its editorial advisory board.

IEEE membership offers a wide range of benefits and opportunities for those who share a common interest in technology. If you are not already a member, consider joining IEEE and becoming part of a worldwide network of more than 400,000 students and professionals.

IEEE Senior Member Qusi Alqarqaz is an electrical engineer with more than 28 years of experience in the power industry. He writes about technology, works as a consultant, and mentors younger engineers and students. He is a contributor to The Institute as well as serves on the publication's editorial advisory board. He previously worked in Qatar and the United Arab Emirates.

More from The Institute

From Engineering Intern to Chairman of Tata

Become an IEEE member and get exclusive access to more stories and resources, including our vast article archive and full PDF downloads
JOIN IEEESIGN IN
Get access to unlimited IEEE Spectrum content
Network with other technology professionals
Establish a professional profile
Create a group to share and collaborate on projects
Discover IEEE events and activities
Join and participate in discussions
Type Feature Special reports

The cost of improvement is becoming unsustainable

This article is part of our special report on AI, “The Great AI Reckoning.”