A Russian Return to a Martian Moon 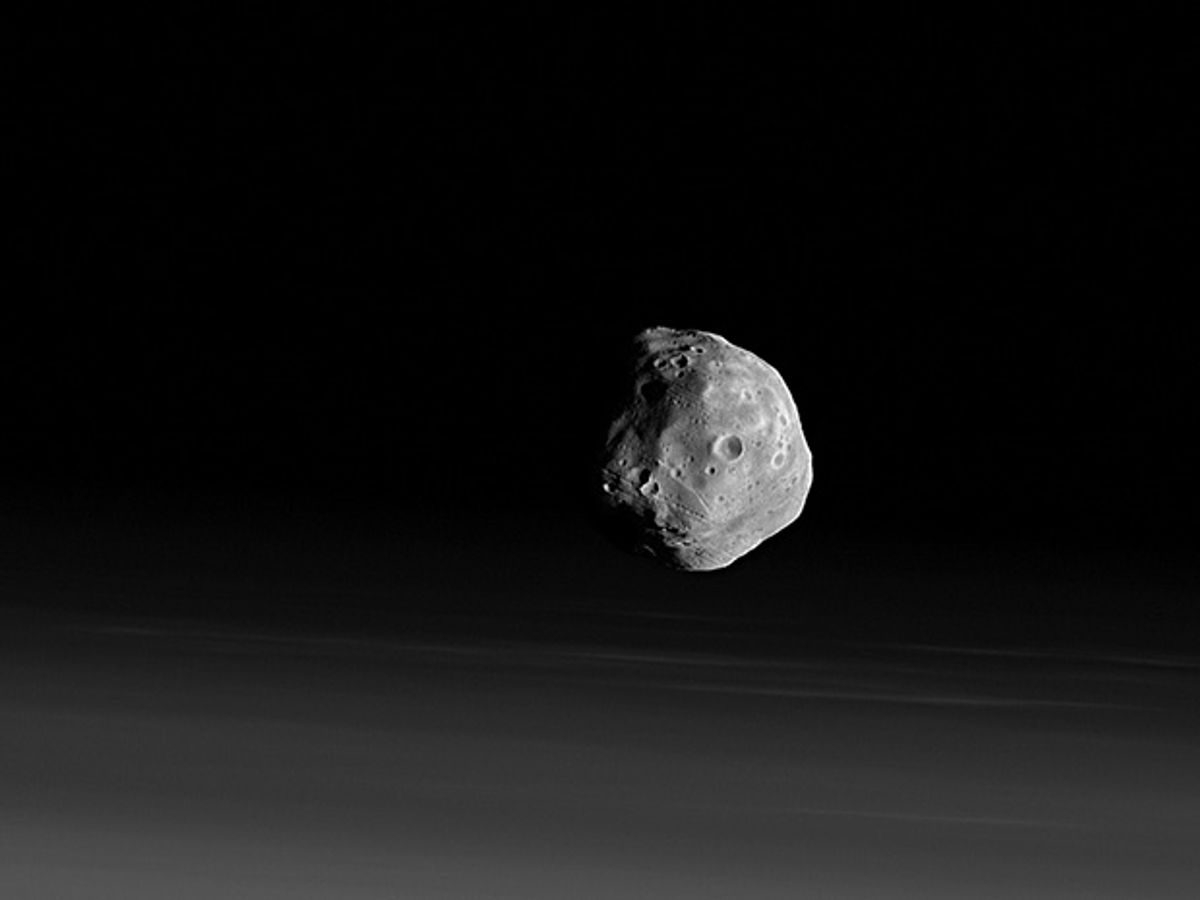 This is part of IEEE Spectrum’s Special Report: Why Mars? Why Now?

Tiny, potato-shaped Phobos doesn’t look like a place worth visiting. But the Soviet Union tried twice, with limited success, to reach this Martian moon, the larger of two circling Earth’s near neighbor. Now the Russians are working flat out on a third assault, in the form of a sample-return probe called Phobos-Grunt ( grunt is the Russian word for “soil”). At press time, technical problems seemed likely to push back the launch by two years, to 2011. Whenever it flies, it will be Russia’s most ambitious deep-space mission in years.

Why Phobos? Measuring just 27 kilometers at its widest, the satellite orbits the Red Planet about three times a day, at an altitude of 9400 km. If you were standing on Mars’s equator, Phobos would appear about half as big as the sun. Planetary scientists have long debated the mysterious moon’s origin. They’ve also proposed Phobos as a landing site for a crewed mission to Mars.

Phobos-Grunt should shed light on both matters. The spacecraft will ride on a Zenit rocket, a well-tested Soviet design. Also on board will be a life-sciences experiment from the Planetary Society and an orbiter built by the Chinese. Touching down on Phobos, the lander will use a clawlike manipulator to grab 15 to 20 samples of regolith, the loose surface material, and load them into a return capsule. The capsule will be rocketed back to Earth, leaving the lander to perform further studies.

The value of a sample-return mission is obvious, says Francis Rocard, a planetologist participating in the Phobos-Grunt mission on behalf of the French space agency, CNES. “What we can do in the lab is absolutely different from what we can do in situ,” Rocard says. “Sample-return missions always lead to discoveries.” Although other kinds of probes have yielded groundbreaking results—take the NASA Phoenix lander’s recent discovery of water ice on Mars—they can’t do the most complex analyses, such as carbon dating, electron microscope scans, or precise isotopic measurements. For that, you need to bring the specimens home. Doing so also lets separate groups of scientists study the samples using different methods, a critical step for achieving widely accepted conclusions.

Phobos-Grunt could, serendipitously, retrieve samples from Mars itself, Rocard adds. During the violent youth of the solar system, space rocks carpet-bombed the Martian surface for eons, and some of the debris from those impacts may have ended up on low-orbiting Phobos.

Despite their value, sample-return missions are rare, largely because of their complexity. During the launch into orbit, the landing and sample retrieval, and the journey back to Earth, many things can go wrong. And when it comes to Mars, something usually does. Before its dissolution, the Soviet Union sent 19 spacecraft to Mars, including the two Phobos probes in 1988. Only four of them reached the Martian system, and none completed more than a fraction of its scientific work. The first and only post-Soviet attempt to explore the Red Planet—Mars 96—never made it out of low Earth orbit.

Since then, Russian scientists have mostly looked on as U.S. and European missions produced a wealth of new data on the dramatic geological history of Mars. The Russians contributed instruments and experiments to these projects, but their own planetary exploration program remained grounded and short of funds.

Despite the chronic lack of resources, investigators at the Space Research Institute of the Russian Academy of Sciences, known by its Russian acronym, IKI, have remained committed to Mars. They first proposed Phobos-Grunt in the late 1990s and, with the mission in mind, slowly rebuilt their scientific team, which suffered considerably after the fall of the Soviet Union. “With the brain drain of the 1990s, we kind of lost a middle generation who would have now been able to transfer their experience to young specialists. It is almost like during the war. We have a generation gap,” says Lev Zelenyi, director of IKI.

In terms of gravity and orbital mechanics, the mission will be easier to pull off than landing a probe on the Red Planet itself. But retrieving soil samples will be tricky. Scientists thought they could repurpose drilling hardware designed for the 1970s Soviet lunar missions. Then they realized that given the gravity on Phobos—which is all but nonexistent—the equipment would likely overturn the spacecraft. Eventually, they settled on the robotic manipulator.

All that remains after the samples are collected is to take off from the surface, escape from orbit around Mars, cruise millions of kilometers through interplanetary space, and survive the plunge into Earth’s atmosphere. As if those things aren’t chancy enough, for its final descent, the return capsule won’t use a parachute. The craft will rely instead on a lining of crushable materials to absorb the impact.

That, at least, is the plan. Although the mission has been in the works for more than a decade, major funding for Phobos-Grunt materialized only two years ago, and equipment development and construction have had to come together quickly. Too quickly, perhaps: In April, people familiar with the project said the launch date would be delayed from October of this year to 2011.

Assuming that happens, Phobos-Grunt won’t be the only Mars mission to suffer setbacks. Recently, two other projects announced delays: NASA’s Mars Science Laboratory, the agency’s largest rover yet, and the European Space Agency’s ExoMars rover, designed to search for signs of life.

Meanwhile, Russian researchers are already looking beyond Phobos-Grunt. At NPO Lavochkin, a spacecraft company near Moscow, engineers are trying to reinvent planetary spacecraft. The complex vehicle they have in mind builds on the Phobos-Grunt platform but has improved flight-control and propulsion systems. It also features an upper stage that’s designed to be maneuverable, versatile, and durable.

Such a spacecraft could be used for flights to the moon, Mars, and beyond. One day, it might even land on the ice¿Äëcovered oceans of the Jovian moon Europa. Last year, the Russian government provided IKI with seed money to study such a mission. NASA and ESA also recently backed a mission to Europa, notes IKI’s Zelenyi. “If everything goes as we conceive it, an international flotilla of spacecraft could be heading to Jupiter,” he says.

For more articles, go to Special Report: Why Mars? Why Now?

Anatoly Zak is a science writer, illustrator, and animator whose fascination with the history of space exploration began when he was a high school student in Moscow.