In 2012, 3-D printing technology will go from prototyping to production 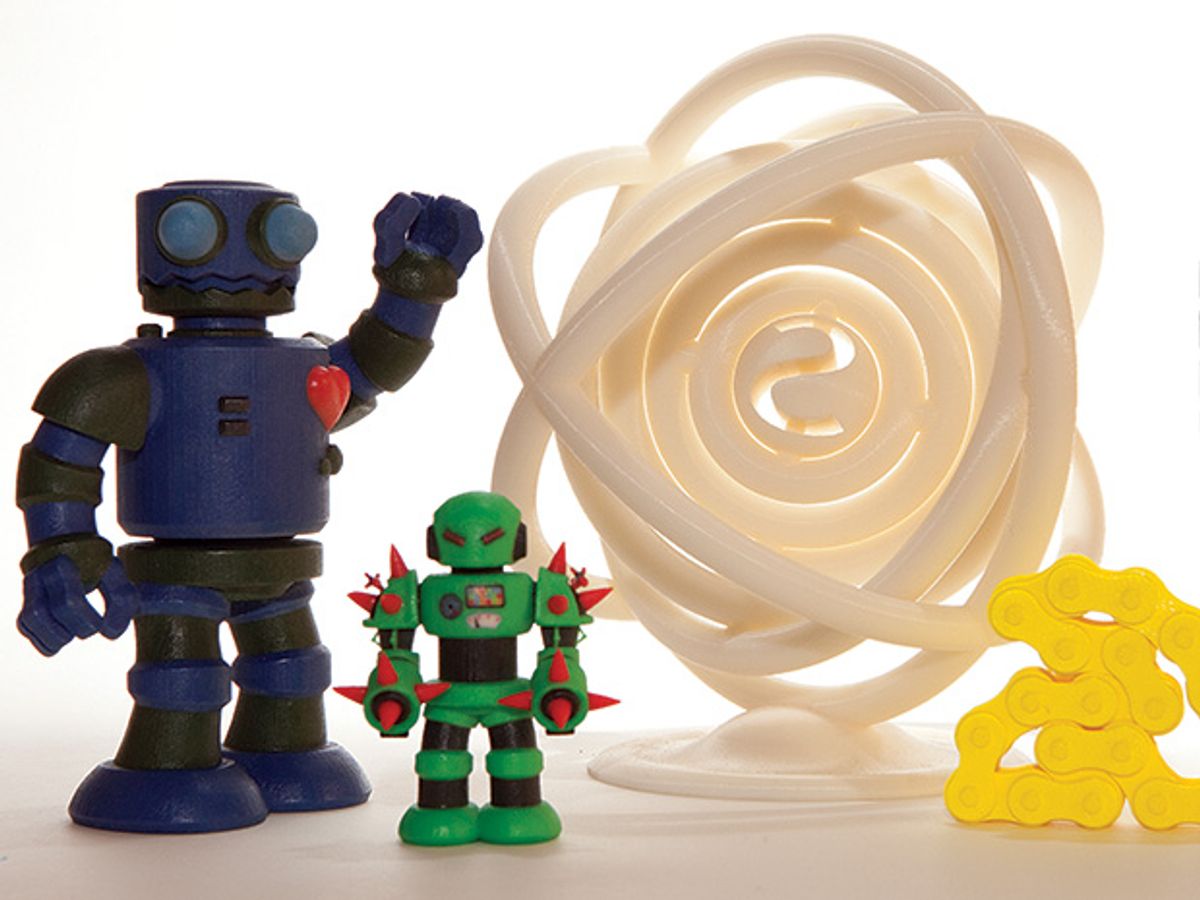 Too, Too Solid: The robots (above, at left) are from My Robot Nation; the movable concentric rings (created that way—no assembly required) and the folded-overbicycle chain are from Stratasys;the gold-plated metal matrix andthe glazed ceramic vase (right) come from Ponoko.
Photo: Randi Silberman Klett

The promise of 3-D printing is tantalizing: You envision something, draw it with the right software, and then print it in three dimensions—regardless of how many parts it has, how they interlock, or whether they will even be accessible once your creation is completed. With this strategy, anyone can make almost anything. Someday, lots of stuff will be manufactured this way, on demand.

Full realization of that promise remains a long way off, but the bandwagon is rolling. Thousands of machines, ranging from kit-built tabletop models to commercial behemoths capable of printing the body of a small car, are out in the world producing parts. And starting this year, the United States’ Defense Advanced Research Projects Agency is planning to put 1000 production-quality 3-D printers in high schools across the United States as part of its Manufacturing Experimentation and Outreach program. Even if you don’t have access to one of those machines, you can get a free download of Autodesk 123D, a 3-D computer-aided-design program still in public beta testing, which gives you push-button connections to online 3-D-printing services, of which there are now dozens, if not hundreds. So if you’re not already printing objects on a regular basis, there’s a good chance that in 2012 you will be.

Many 3-D printed objects are used behind the scenes in the production of something else. Jeff DeGrange of Stratasys, a manufacturer of 3-D-printing machines in Eden Prairie, Minn., came to the company after 20 years in manufacturing R&D at Boeing. So when asked where 3-D-printed parts are being used, he naturally offers as an example aircraft companies that print assembly-jig inserts for holding wing sections and other parts in place for drilling and fastening. He says the companies that manufacture high-performance cars have also begun 3-D-printing molds for carbon-composite panels. Machining or sculpting the complex curves required for these body panels is far too time consuming and expensive to do any other way.

Meanwhile, dental laboratories are using 3-D printing to help fabricate crowns and bridgework, metal¬working companies print molds for casting jewelry and other small objects, and small-¬aircraft manufacturers, such as Piper, have even found that 3-D-printed dies can serve for stamping aircraft parts out of sheet metal. The applications go on and on.

What all these examples have in common is the high cost of conventional production of parts used for tooling or machining. Injection molds can cost thousands or tens of thousands of dollars for a single design, so it often makes sense to spend even hundreds of thousands for a production-capable 3-D printer that can churn out many different plastic shapes with ease. Plastic parts produced by fused-deposition-modeling machines (which spit out liquid plastic to build up the desired geometry) typically have about two-thirds the strength per unit area of injection-molded plastic parts, but that’s just fine for most applications.

If you don’t work in one of a relatively few forward-thinking industries, you’re more likely to get or give a 3-D-printed object as an artsy gift than to use one for practical purposes. Scott Harmon of Z Corp., in Burlington, Mass., explains that digital art is a significant part of the market for his company’s machines and those of some other manufacturers. Z Corp.’s powder-bonding technology, with binder-spraying cartridges and heads based on inkjet printers, can make full-color objects simply by adding pigments to the binding liquids.

Having multiple colors is nice for distinguishing the working parts in models of mechanical devices, and it’s essential for many other products. As examples, Harmon cites among other items bobble-head dolls, heroic statuettes of computer-game players’ alter egos from World of Warcraft (at FigurePrints), and design-it-yourself 1950s-style robot figurines at My Robot Nation. If you want digital art that’s more elaborate than what you can think up on your own, there are 3-D-printing services, such as Shapeways and Ponoko, that should delight you. Select an object from their online galleries or send them a design file and some money, and they’ll send you the thing printed in plastic, sintered metal, or glazed ceramic.

If you just have an idea, you can turn it into the appropriate digital file using Autodesk 123D or any of a handful of other free or low-cost 3-D design programs. For those who want to work on their own designs entirely in the cloud, there’s Tinkercad, a simple but still useful program that operates entirely in a browser and has a button for sending the completed design to Shapeways or i.materialise. And if you’d prefer to design something involving shapes based on mathematical functions, there’s OpenSCAD, an open-source solid-geometry app that lets users write programs to combine geometric primitives like spheres and cylinders.

For many people, the age of 3-D printing has already arrived. For others, it’s still in the future but getting nearer every day. If you’re one of the latter group, 2012 would be a good year to learn how to print objects. Even a company that can’t yet make money from this technique might want to get a feel for it now rather than try to scale the learning curve after its competitors have done so.

This article originally appeared in print as “Taking Shape.”

Paul Wallich, when not reporting on oddball technologies, takes to his shop to make small household parts by casting, carving, forming, filing, sawing, drilling, riveting, tapping, soldering, gluing, sanding, and polishing. He has been following digital 3-D printing since its early, hobbyist days; in this article, he shows how it’s now changing manufacturing.