This EV is fast, long range, and affordable 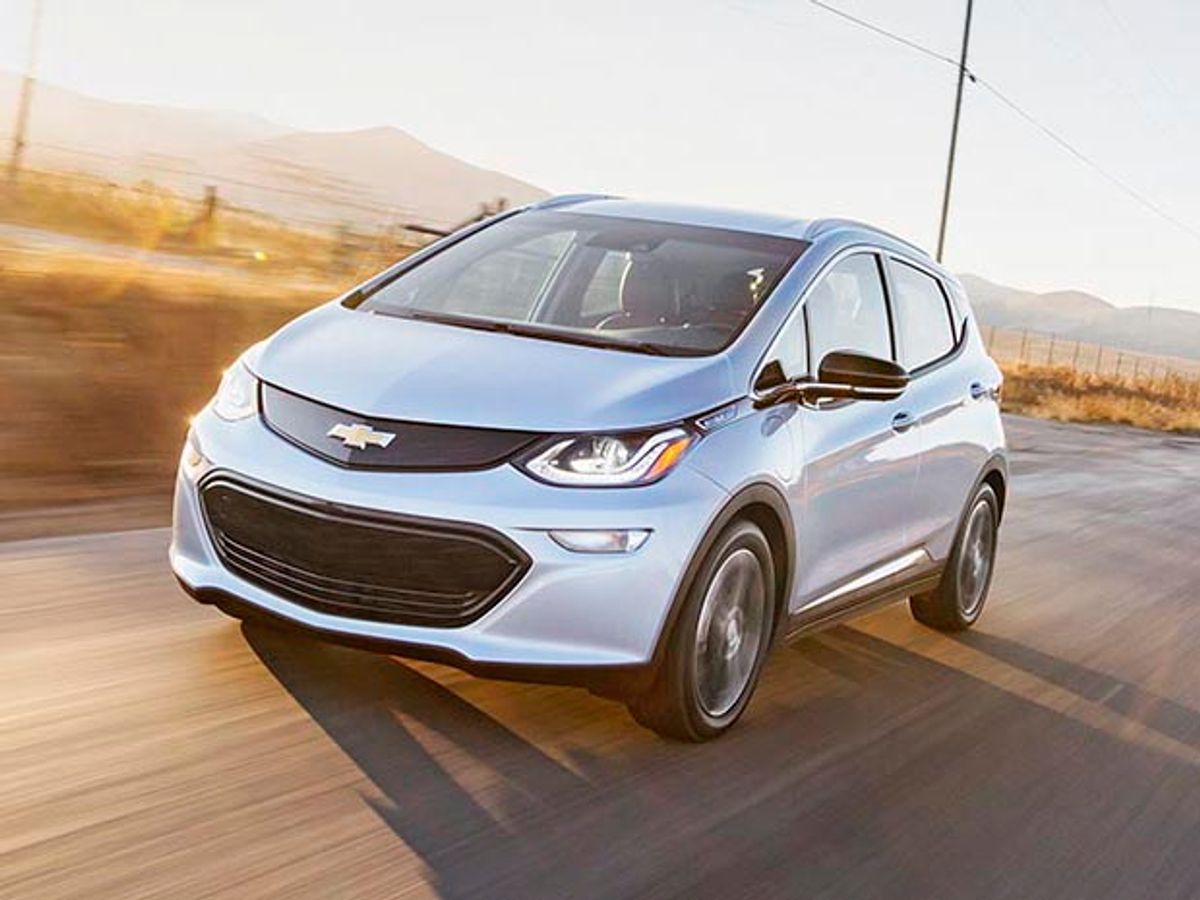 The Chevrolet Bolt hums off of Mulholland Highway and swings east toward Malibu, a view of frothy Pacific surf filling its steeply raked windshield. After 3 hours of driving, from suburban L.A. snarls to wilderness canyons, the all-electric Bolt is well on its way toward topping its official, EPA-rated range of 383 kilometers (238 miles).

It’s my first drive in the Bolt, whose unassuming shape masks seriously ambitious thinking and technology. And I don’t mind saying I’m having a blast. But there’s more testing to do. Now, ahead of me, a Toyota full of youngsters that’s adorned with a Pepperdine University bumper sticker is ambling down the Pacific Coast Highway, part of the famous Highway One, which cuts a spectacular swath from the redwoods of Northern California nearly all the way to San Diego.

Easing up behind the Toyota, its occupants completely unaware of my stealthy approach, I nudge the Bolt left, hammer the gas—er, accelerator—and feel the signature, instant-on shove of 361 newton meters (266 foot-pounds) of electric torque. The front-mounted electric motor, its magnets made from dysprosium (it’s a rare earth element—you can look it up), cranks out 149 kilowatts (200 horsepower).

And that’s not the only wizardry under the hood. Its motor maxes out at 8,810 rpm, almost twice the revs of the Chevy Spark EV’s motor. As a result, the Bolt’s single-speed transmission can adopt a much shorter gear ratio to boost efficiency.

The upshot? The Bolt is no Ludicrous-mode Tesla, but it’s still seriously quick, able to scoot from 0 to 100 kilometers per hour (62 miles per hour) in about 6.3 seconds. The Bolt flies past the Toyota, and the only clue to the accelerative violence taking place is a mellow electric hum.

The Bolt has already won a more-important race: With all eyes on Tesla’s long-delayed Model 3, it’s Chevrolet that has delivered the world’s first affordable long-range electric car.

It remains to be seen how many people are yearning to go electric but have been deterred by, for example, the US $120,000 price of the Tesla Model S P90D. At $29,995, after figuring in the generous $7,500 U.S. federal tax credit, the Bolt is poised to usher in a new era of pure electrics. The Chevy likely renders short-range EVs obsolete, along with the “range anxiety” that turned off buyers who shied away from a car that couldn’t quite get to Grandma’s house and back.

Chevy made waves when it disclosed it had achieved an industry-low cost of $145 per kilowatt-hour for the Bolt’s battery, even angering its LG Chem supplier, which feared that other customers would demand a similar deal. Bill Wallace, GM’s chief battery engineer, said it was less about arm-twisting its supplier and more about applying low-cost methodologies—from raw materials to manufacturing—while ensuring that the Bolt battery wouldn’t flame out like a Galaxy Note 7.

To carve out enough range for about 4 hours of freeway travel—or perhaps a week’s worth of around-town operation—the Bolt packs a remarkably compact and power-dense battery that spans its entire floor. Its 60-kWh capacity matches the battery in the base-model Tesla Model S.

Peaking at 160 kW, the Bolt’s 288 lithium-ion cells have a “nickel-rich” chemistry, which boosts the ratio of nickel beyond the typical 1:1:1 spread with manganese and cobalt of this type of battery. The new nickel-boosting technology not only stores more energy but can also run hotter, by about 5 °C, with no loss in performance and durability.

Rather than the air cooling employed by EVs like the Nissan Leaf, the Bolt adopts the more costly and sophisticated liquid cooling of its cousin, the plug-in hybrid Chevrolet Volt. That system should make for longer battery life, especially for owners in hotter climes.

That underfloor battery does double duty as a structural unit, boosting chassis rigidity by 28 percent. I sensed the car’s impressive solidity and quiet in my first minutes behind the wheel, including the first time I flung the Bolt through a sharp turn. This little squirt is legitimately capable and fun to drive. The Bolt goes about its business beautifully, with that spunky surge of electric torque, confident handling, and the angelic, distant-choir hum of an EV.

The Bolt’s econobox styling and interior are my only real complaints, a seeming lost opportunity for GM to steal some of Tesla’s high-design cachet and buyers. But in GM’s defense, 60-kWh batteries aren’t cheap, and the Bolt met its daunting price target while delivering big on the technology, engineering, and performance under the skin.

And there’s still good stuff inside. I especially liked the cool, Cadillac-derived rearview mirror that uses a camera to dramatically expand the view. Wireless phone charging, a 4G LTE Wi-Fi hotspot, automated pedestrian braking, and forward-collision and lane-departure monitors are among the snazzy options.

A clever driver’s display brings welcome transparency to that pressing EV question: How far can I really go in this thing? In my EV testing, including of the Tesla models, predictions of remaining mileage or battery level have been highly unpredictable. Crank the heater or play with that zippy Ludicrous mode and the mileage display suddenly drains away like sand in an hourglass. In contrast, the Chevy sandwiches a large numeric readout of remaining distance between a best-case and worst-case scenario. Another digital bar shows which direction you’re trending, based on driving style, terrain, climate-control usage, and ambient temperature.

Outstanding efficiency is another upside. Even with a few energy-sucking romps to the Bolt’s electronically limited top speed of 148 km/h (92 mph), in my test I saw the electrical equivalent of 1.96 liters per 100 km (120 mpge). Officially, the Bolt earns a rating of 119 mpge from the U.S. Environmental Protection Agency. That figure breaks down to 1.84 L/100 km (128 mpge) in the city and 2.14 L/100 km (110 mpge) on the highway. Tesla’s rear-wheel-drive Model S is larger and faster, but it goes only 75 percent as far on a given amount of juice.

The Chevy also offers the “one-pedal” driving that EV fans quickly fall in love with. Four adjustable levels of regenerative braking return progressively higher amounts of energy to the battery, allowing you to step off the gas or squeeze a steering-wheel paddle and smoothly decelerate without touching the foot brake. It’s especially enjoyable in city traffic or on twisty downhill roads, and Chevy says the max-level regen can boost the Bolt’s real-world driving range by up to 5 percent.

As for charging, the Bolt’s 7.2-kW onboard charger will stuff an empty battery in less than 10 hours on your basic 240-volt, 32-ampere charger—perfect for overnight home charging, or at workplaces and retailers that offer this Level 2 charging. For an extra $750, time-pressed owners can buy a DC fast-charging coupler that adds 145 km (90 miles) of range in 30 minutes, 257 km (160 miles) in 60 minutes, and a full charge in 2 hours. The network of megapowered DC chargers is in its infancy, with 868 U.S. locations and about 1,800 plugs at last count, but it’s growing.

Buyers of EVs tend toward optimism, anyway. Fortunately, the Bolt offers plenty of other reasons to feel hopeful about the electric future.